After a children’s race on Monday Evening, Mayor of East Sarajevo Nenad Vuković opened the 59th International Bicycle Race through Serbia, which kicks off from Republika Srpska for the first time.

Serbian Ambassador to BiH Aleksandar Đorđević has said it is extremely important that the two countries are brought closer through sporting events.

Assistant Minister of Sport of Republika Srpska Dragan Jaćimović stressed the importance of hosting the event and the good cooperation between the two governments.

President of the Cycling Association of Republika Srpska Vladimir Kuvalja said a presentation of teams was held on Monday and that all participants were accommodated on Mount Jahorina.

Kuvalja said everything was ready for the race to start at noon on Tuesday, adding that mayors of the cities through which the race is held recognised the significance of this sporting event at a tourism promotion event. 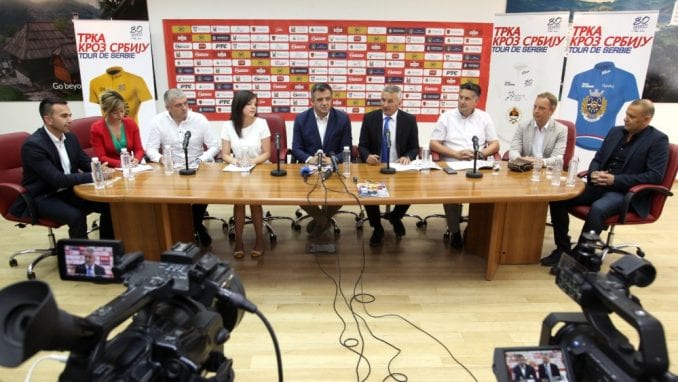 After the children’s race and an opening ceremony, a presentation of 150 competitors from some 30 countries was held.

The race which begins on Tuesday will be held in stages through Friday, August 2, running from East Novo Sarajevo, through Jahorina, Pale, Priboj, Zlatibor, Čajetina, Mionica, and to Belgrade and Požarevac.

The bicycle race starts Tuesday at noon in front of the City Hall in East Sarajevo.

The trail then heads towards a roundabout, through the Hilandarska, and Kasindolskog Bataljona streets, continuing down the regional road Jahorina-East Sarajevo. It then goes down towards the waterworks company, making a circle around Hotel Espana, and the finish line of the first stage is in front of the City Hall.

The first stage awards ceremony begins at 2.10 p.m. and statements for the press are planned for 2.30 p.m.

Apart from the competition part, the event also promotes the tourism potential of Republika Srpska and Serbia.

The competition part of the Race through Serbia is not minor as cyclists from all over the world gather points for the Tokyo Olympics.

The first Race through Serbia took place in 1939, and this year marks the 80th anniversary of competitive cycling in Serbia.