Konjic resident Anis Kosovac could not wait for authorities in his municipality to honour two Serb boys whom Bosniak soldiers killed in 1992, so he reached out to his community and gathered enough money to put up a commemorative plaque for the boys at the entrance to the local Orthodox Serb cemetery. 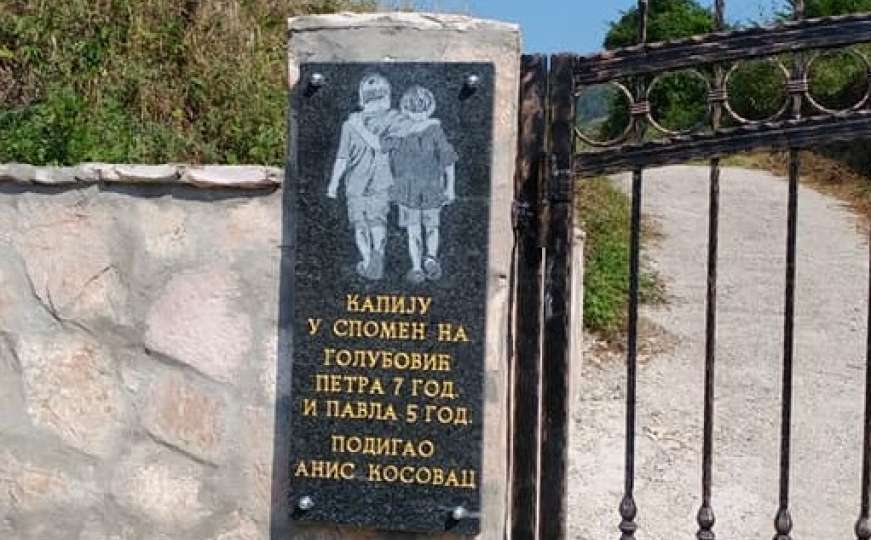 ‘This was decided long ago, but we waited for municipal authorities to do it, and since the municipality won’t, I did it,’ he said.

Kosovac takes care of the local Orthodox Serb cemetary and he is also responsible for the new gate that was installed there.

The plaque he put up portrays two boys, Petar and Pavle Golubovic, walking away as they are hugging one another.

The Golubovic family was among the victims of an operation by the Bosnian Army which involved rounding up and executing Serbs in the Konjic area in 1992. Six members of the Special Police took the two boys and their parents from their home. They ended up before a firing squad.

Petar was seven, and Pavle was five years old.

Petar is the only one who survived, but not for long. He reached a nearby checkpoint and asked for help, but the people stationed there handed him over to those who killed his family.

This time, Petar did not survive.

State police have last year arrested 13 former members of the Army of Bosnia and Herzegovina for the atrocities committed in Konjic during the war. Former Bosnian Army member Miralem Macic was sentenced to 12 years behind bars for the murders of the Golubovic family in 2011, but he died a year later.

Kosovac did not want to talk about himself a lot in front of cameras, but he pointed out that his municipality is not the only one that is late in putting up monuments.

‘In the same way, Sarajevo’s municipalities did not erect a monument for Bosko and Admira, and they never will, and Trebinje did not erect one for Srdjan, so citizens have to do that (…),’ he said.

He was referring to the stories of ‘Sarajevo’s Romeo and Juliet’, Bosko Brkic and Admira Ismic, and to that of Srdjan Aleksic.

Bosko was a Serb, and Admira was a Bosniak. The two were killed by sniper fire as they were crossing a bridge in Sarajevo’s centre. They passed away in each other’s arms.

Srdjan Aleksic was a Serb soldier who saw his comrades harassing his Bosniak neighbour and tried to stop it. The soldiers beat him into a coma. He died a week later. Today, he is hailed as a hero.

Luka Ivanisevic, a local who knew Kosovac praised his act.

‘Every initiative that speaks out against evil is good, no matter where happens. This memorial plaque speaks about the deeds of non-humans, who destroyed entire families, murdered innocent children (…),’ he said.

He added that every initiative that speaks about the evils that people committed should be supported, ‘so that younger generations are warned that in those times we were evil and that they should be better.’

‘A culture of remembering is a waymark for us so that these things cannot and must not happen,’ Buzanin said.

He said that what happened to the Golubovic family is a warning that shows ‘what kinds of horrors happen when people lose their minds and a sense of reality and when people who are not fit to govern come to power.’

Thanks to the little plaque that Kosovac put up, what happened to the Golubovic boys will never be forgotten in Konjic.

There was bitterness in Kosovac’s voice when he spoke. He said that when the story of Bosko and Admira becomes Bosnia’s anthem, ‘there will no longer be any bitterness.’