The request of President Vucic made at Monday’s session of the UN Security Council dedicated to Kosovo would bring the UN back to the negotiating table.

Namely, during the meeting of the Council, Vucic requested a greater future role of the UN in the continuation of the Belgrade-Pristina dialogue.

The newspaper recalled that in the past, there had been demands for the process to return under the umbrella of the international body.

However, the article continued, this had been opposed by Brussels, under whose auspices the Belgrade-Pristina dialogue on the normalization of relations has been ongoing without success for eight years now.

Serbian Foreign Minister Ivica Dacic told the newspaper that “now maybe the best moment for the Kosovo and Metohija issue to be returned under the auspices of the UN.”

“It would be healing for the dialogue process, and hopefully we could come up with a mutually acceptable solution that would be guaranteed, along with our strong allies Russia and China, by the US,” he said.

Aleksandar Vucic has told Voice of America (VOA) that he was pleased with the results of Monday’s UN Security Council session.

The session was called to discuss Pristina’s decision to start forming an army in Kosovo – a move Serbia strongly opposes.The Serbian president told VOA that Serbia has “informed everyone about the situation in Kosovo.”

In his address, he informed the Security Council that Serbia fulfilled all the obligations from the Brussels Agreement, while, as he said, “Pristina did not fulfill anything.”

He also informed the Council about the daily attacks on Serbs (in Kosovo), the arrest of Director of the Office for Kosovo and Metohija Marko Djuric, the taxes on Serbian goods, with the aim to show the countries that advocated for Kosovo’s independence “what they have created.”

Vucic also met after the session with UN Secretary-General Antony Guterres, with whom he discussed Pristina’s unilateral moves and the situation in the region, the president’s office said. Vucic thanked Guterres for expressing concern over Pristina’s decision to form armed forces and stressed that Pristina’s moves put regional stability at risk. He pointed out that Serbia continues to advocate a continuation of the dialogue, after Pristina withdraws its irrational decision.

The president said that Serbia attaches special importance to the presence and operation of UNMIK (UN mission) in Kosovo, bearing in mind that the political and security situation in Kosovo remains unstable.

“The presence and operation of UNMIK in Kosovo is of crucial for the Republic of Serbia, since the UN framework, based on this resolution (1244), guarantees the status neutrality of the international presence in the province,” Vucic said, and asked for greater UN involvement in the Kosovo issue.

“Fear for future”
According to the text of his address at the Council published by the Serbian government, Aleksandar Vucic said that he was worried and afraid for the future not only of the Serb people and Serbia, but the entire region.

Vucic warned about Pristina’s efforts to impose legal and political violence, economic pressure and unilateral moves, such as imposing taxes and forming the so-called Kosovo army, creating a new situation on the ground and extorting recognition from Serbia.

At the session, held at the request of Serbia and the Russian Federation on the occasion of Pristina’s decision to form a so-called Kosovo army, he stressed that Pristina did not fulfill its obligations under the agreement that it signed in Brussels, and that it violated the CEFTA (regional free trade) agreement and the SAA.

“I must say that I am very concerned, and even a little scared for the future, not only of my people and our country of Serbia, but of the entire region. I want to say that Serbia has made enormous efforts to establish peace and stability in the entire Western Balkans. We did everything to refrain from responding to the various provocations that came from Pristina,” Vucic said.

Serbia, as he said, did almost everything to implement what has been agreed so far. “As you know, we signed the first deal of Belgrade and Pristina, and Serbia has fulfilled all its obligations. We made a lot of concessions and it was very difficult for our public to accept it, but we did it.”

He stressed that, on the other hand, the only obligation Pristina had to fulfill relates to the establishment of the Community of Serb Municipalities.

Vucic spoke about Pristina’s introduction of 100 percent taxes on Serbian products after Kosovo was not admitted in Interpol and UNESCO.

“Can you imagine someone in the 21st century who forbids and hinders the free flow of people and goods, only because it does not like the political decisions of the other side,” asked Vucic.

Vucic urged that somebody needs to prevent such measures by Pristina.

The president pointed out that Kosovo and Metohija is officially territory with the lowest returnee (persons expelled from their homes) rate in the world, standing at only 1.5 percent.

Vucic recalled that UNSC Resolution 1244 establishes a legal framework for continuing the international presence in Kosovo, as well as a mandate for a safe environment for everyone in that regard.

According to Vucic, Serbia has always done everything to maintain stability and peace throughout the region.

Vucic also said that Pristina chose a new negotiating team with people from the KLA who are under investigation for crimes against Serb civilians.

He said that Serbia is ready to continue the dialogue process and that our country wants to call on the UN to take a bigger role in the future.

“We have nothing against the dialogue being under the auspices of the EU, but we want the UN to be more involved in the process. Pristina must withdraw those terrible tariffs and must make other moves and we will find ways to ensure the security of our people,” concluded Vucic.

Representatives of the US and the UK in the Security Council supported transformation of the Kosovo Security Force into an army, while Russia opposed it, describing the move as “a threat to peace.” China’s representative also supported Serbia. 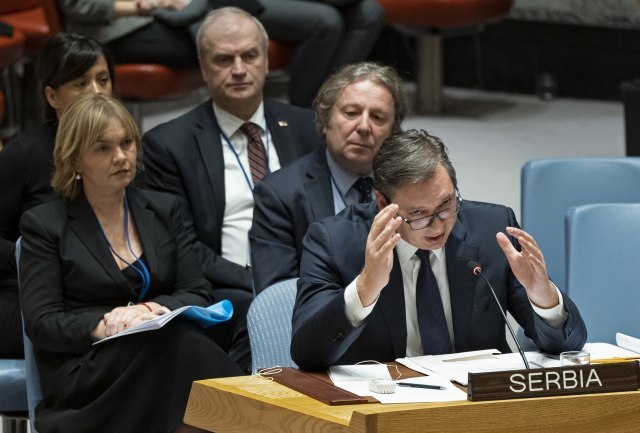 Russian Ambassador Aleksandr Chepurin has commented on Twitter one detail of the UN Security Council meeting dedicated to the so-called Kosovo army.

“We noticed that Aleksandar Vucic spoke next to the sign (reading) ‘Serbia’, as did representatives of members of the UN Security Council, Russia, China, US, etc. (next to the names of their countries). Whereas Hashim Thaci was – next to the sign ‘Hashim Thaci’. All done correctly. The UN secretary-general received the president of Serbia, while he refused a meeting with Thaci,” Chepurin’s tweet, written in Serbian, said. 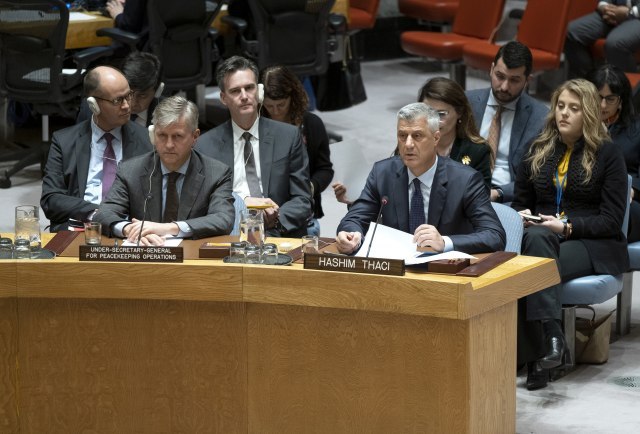