BiH is the meeting point of different peoples and religions, which largely contributed to the fact that, according to religious and cultural heritage, it is one of the richest countries in entire Europe. Three large religious communities in BiH have important sanctuaries that are visited by tourists coming from all over the world, although the entities and the state of BiH have no developed strategy of promoting religious tourism.

The most visited and attractive destination in the area of religious tourism in BiH is definitely Medjugorje. It is located 25 km from Mostar and, according to stories, a group of young people testified the appointment of Virgin Mary in 1981 there. 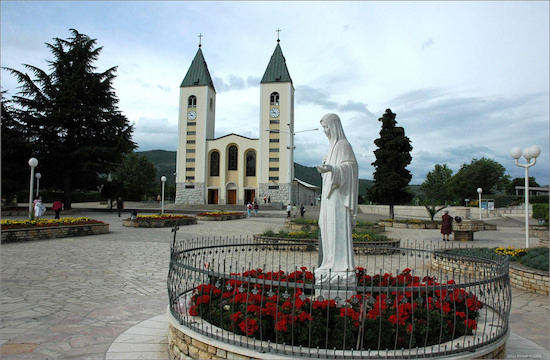 “Medjugorje is the largest example and phenomenon that people are visiting exclusively due to religious purposes,” said a travel guide from Sarajevo, Ahmed Lavic.

Besides Medjugorje, the other, very attractive, religious destination in BiH is Ajvatovica, and it is the largest Muslim praying site in Europe, where believers are gathering for 500 years now, and Tekke on Buna River where dervishes worship God with special rituals.

Sarajevo is, of course, an interesting destination, and it represents a small space that has been a meeting point of three confessions for centuries.

“It is very rare in the world to find a city with all the confessions and sanctuaries on 100 square meters. All the tourist who come to Sarajevo usually visit the Cathedral, the Old Orthodox Church, the Gazi Husrev-bey Mosque and the Old Temple, and there is a lot of potential for development. Therefore, religious tourism is one of the branches of tourism that will be the topic of our plan and program for this year,” said the former director of the Tourist Board of Canton Sarajevo, Nermin Muzur.

It is a fact is that the cultural and economic importance of the promotion of religious tourism is large because it can achieve numerous benefits.

There are numerous cultures and religions in the territory of the Republika Srpska as well, and when it comes to religious tourism, the accent is on Trebinje, a city that has tours of medieval monasteries of this region in its offer, as Tvrdos Monastery and Hercegovačka Gračanica monastery .