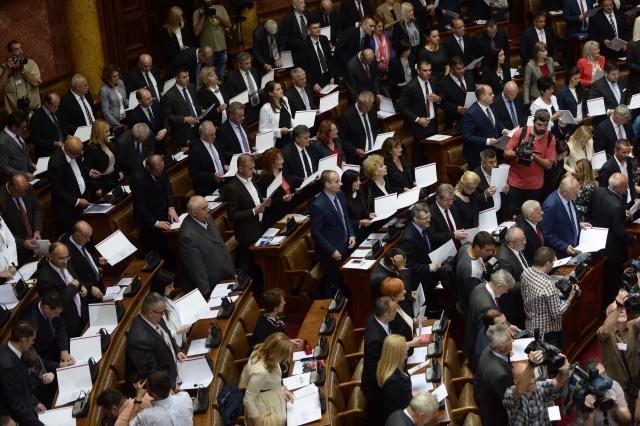 Dragoljub Micunovic (DS), who temporarily presides over the new Assembly as the oldest MP, late on Friday adjourned its constitutive session until Monday.

Micunovic explained that he adjourned the session because 33 deputies were yet to take part in a debate and that some of them were entitled by the rules of procedure to speak for a longer period of time.

SNS and SPS deputies stayed in the hall after this announcement. B92 reporter at the scene heard some deputies from the majority refer to the development as “a coup.”

Marija Obradovic (SNS) called an extraordinary news conference and accused Micunovic of abusing his “honorary function,”describing the manner in which he chaired over the session on Friday as “most disgraceful and insolent.”

Obradovic argued that Micunovic had no reason to suspend the session “and lose us two days at an important moment” but added that the Assembly has been constituted with the verification of mandates, and that this has not been brought into question.

After the verification earlier in the day, a debate on electing the new assembly president began at around 14:00 CET, with Maja Gojkovic (SNS) put forward for the post by the majority.

The agenda of the first session of the new parliament also includes the election of the deputy speakers, the secretary general and members of the parliamentary working bodies.

Commenting on his decision to end the sitting for the day and schedule its continuation on Monday, Micunovic said, “It is not good to elect the (assembly) president at midnight, in the dark.”

People’s deputies, members of the Serbian National Assembly elected on April 24, on Friday morning gathered for the first, constitutive sitting.

They were welcomed with the red carpet, and the Serbian Army Guards.

SRS leader Vojislav Seselj, who is back in parliament after a 13-year break, attracted the most attention.

Deputies from the Dveri Movement first gathered in front of St. Marko’s Church in Belgrade and then arrived to the assembly, in traditional Serbian folk clothing. Their leader Bosko Obradovic, however, was wearing a suit.

The first, constitutive meeting started about ten minutes late, and was presided by the oldest deputy, Dragoljub Micunovic (DS). The deputies had their mandates verified, and then took oath of office. With this, the new Assembly was constituted.

The purpose of today’s meeting was also to elect the assembly’s president, other officials, and heads of permanent delegations in international institutions.

Once the Assembly has been constituted, Serbia must get a new government within the next three months.