Home Entertainment The New York Times: An Archaeological Puzzle on the Danube

LEPENSKI VIR, Serbia — The faces are haunting. About 8,000 years ago, over a period of perhaps 200 years, artists that lived in this settlement on the banks of the Danube carved about 100 sandstone boulders with faces and abstract designs. The faces are simple, with wide round eyes, a stylized nose and down-turned open mouths. They do not look happy.

I imagine these stone heads posing an existential question something like the one my son startled us with when we told him that he had to go to play group even if he didn’t want to. He was 3, and as the loss of freedom struck him, he wailed: “How did this happen to me?”

Archaeologists say the heads seem to be a mixture of human and fish features, accounting for their strangeness. Some designs look like fish skeletons. The gorges and pools in this part of the Danube were long a home to sturgeon and other large fish that sustained human life. Perhaps a fishing people imagined their souls migrating into fish after death.

And many of these sculptures were kept in strange trapezoidal dwellings, with hard limestone floors. In some cases the dead lay buried under the homes. So the sculptures might have represented ancestors. I take this as consistent with my interpretation. You die and suddenly you’re a sturgeon: What’s your first question?

Lepenski Vir — Vir means whirlpool in Serbian — was first inhabited more than 12,000 years ago and off and on over thousands of years. Archaeologists excavated it from 1965-70, when most of the site was flooded during the building of the first of two dams on the Danube. 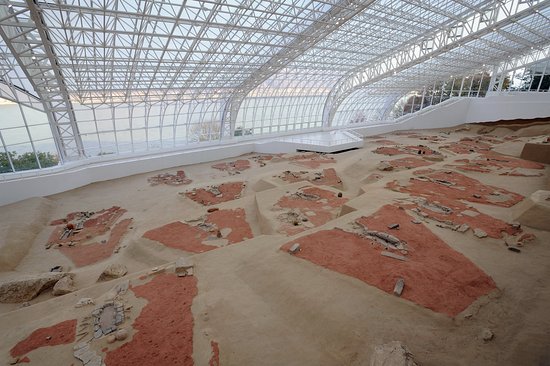 But I first came upon the museum and reconstruction of the site in Serbia only a few months ago as a tourist. I was stunned by the sculptures and the mystery of the site’s past. It sits across the river from a mountain cliff on the Romanian side of the river, and its trapezoidal homes echo the shape of the cliff. There are other sites of similar age, a few of them with boulder sculptures, on either side of the Danube in this area, now known as the Iron Gates. But only Lepenski Vir has boulders with faces.

I called Dusan Boric, an archaeologist who has studied the site extensively, to find out more. Dr. Boric, a fellow at Columbia University’s Italian Academy for Advanced Studies, said Lepenski Vir is more important than ever for research. Studies of ancient DNA that trace patterns of human migration into Europe, chemical analyses of bones and pottery, and continuing archaeological studies of burial practices place the site at the very moment when farmers from the Near East began to migrate into Southeastern Europe and met the hunters and gatherers who lived there at the time.

Researchers still debate the precise dating of different settlements at Lepenski Vir and nearby sites, but agree on the essential fact that the sites capture a record of the meeting and mixing of two cultures and peoples.

It took a few thousand years for agriculture to spread to all of Europe. Permanent settlements were created, and the population itself changed with this migration and others that followed. This transition from a hunting and gathering culture to a farming culture marks the change from the Mesolithic to the Neolithic for archaeologists.

Lepenski Vir offers a snapshot of that process at its very beginning. David Reich, an expert in ancient human DNA and human migration at Harvard, has drawn DNA from bones at Lepenski Vir. “It is a mother lode of material,” Dr. Reich said.

In a recent paper, he and other scientists reported new findings about the “genomic history of southeastern Europe.” As part of that study they drew DNA from four individuals at Lepenski Vir. Two were identifiable as Near Eastern farmers. And studies of the chemistry of their bones show that they had not grown up at Lepenski Vir, but were migrants from elsewhere. Another had a mixed hunter-gatherer/farmer heritage and had eaten a diet of fish. Another had hunter-gatherer heritage.

The dating of the skeletons showed a range. The one with mixed heritage was from 6070 B.C.E., or about 8,000 years ago. The farmers were dated as 6200-5600 B.C.E. And the hunter-gatherer probably earlier than the others.

The DNA of this ancient population of hunter-gatherers contributes only a small fraction of European ancestry today, Dr. Reich said. Europeans now represent a mixture of genetic contributions from waves of migrants. The site, he said, is a key landmark in the “lost landscape of human variation.”

In some other areas, archaeologists and ancient DNA experts have not always seen eye-to-eye, but here, Dr. Boric said, the new techniques have been a great boon. With ancient DNA analysis, he said, “What we are getting is an incredibly powerful tool for understanding what went on in the past.”

I asked Dr. Reich if he experienced the same emotional jolt from DNA findings that I get from the sculptures. “I do,” he said. “It’s a little bit like being a trained musician. You’re able to hear things the untrained person wouldn’t.”

When he sees the results of complicated and statistical DNA analyses pinpointing a moment when different groups of people were beginning to trade cultures and intermarry, he said, it hits him in a visceral way. “These little hints,” he said, “bits of genetic data, mean profound things.” 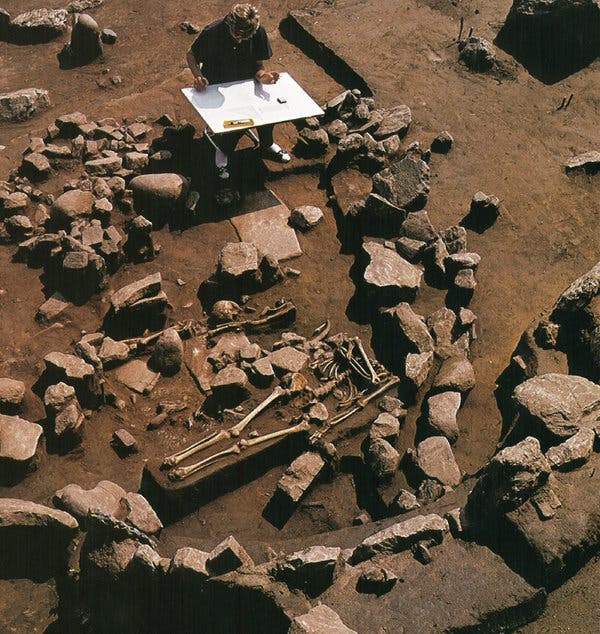 Another indication of the merging of two cultures is a change in burial practices. Throughout Europe, the Mesolithic foragers laid a body down stretched out. The migrant farmers from the Near East brought another way of treating death, setting the body in a crouched or fetal position.

The farmers also brought their animals. There are bones from at least one dog, which may someday help illuminate the muddled picture of dog domestication, which now seems to have occurred separately in Asia and Europe. And then there are the pigs.

Laurent Frantz of Queen Mary University of London, Greger Larson of the University of Oxford and many other researchers just this month published an exhaustive study of the introduction of Near Eastern pigs, originally domesticated in Anatolia, into Europe. They looked at ancient and modern DNA of wild and domestic pigs, including specimens from the Iron Gates sites.

What they found was that the farmers brought their pigs with them, but that over three thousand years, those pigs interbred with European wild boar. Today, the DNA of those original pigs is lost. The farmers from the Near East brought the cultural practice of keeping and breeding pigs, which survived, although the original pig genome did not.

Dr. Frantz said, “The first 2,000 years of domestication that takes place in Anatolia left almost no trace in the modern genome of domestic pigs.”

As to the faces, fishing was important on the Danube before farmers came and continued long afterward. Pottery that was used for cooking grains elsewhere in Europe was used for preparation of fish at Lepenski Vir. And the strange faces appear nowhere else. There are about 100 such sculptures at Lepenski Vir. In neighboring settlements, also of fishing people, also where farmers came and met and married foragers, there are some sculptures with designs like those found on the Lepenski Vir stone heads, but none of the nearby sculptures have faces.

The farmers did not bring them with them. The hunter-gatherers did not make them before the farmers came. They did not spread to the rest of Europe.

I have on my desk now replicas of two of the heads that I picked up when I visited the museum at Lepenski Vir. I look at them and I feel a muddled kinship to the artists, the departed souls, the sturgeon. I too would like to know the answer to what I believe is their question.

How did this happen to me?

But I tell them what I told my son. I have absolutely no idea.