Home Social Anniversary of the death of Petar Petrovic Njegos – ruler of Montenegro...

Petar II Petrović Njegoš, ruler of Montenegro and one of the most important writers in Serbian literature, died on this day (31 October (19 October according to Julian calendar)) in 1851. Despite his political achievements, Njegoš is best known for his poetic and literary output. He began writing poetry at the age of 16, and in his life he wrote numerous plays and works of epic poetry.

P.P. Njegoš (13 November 1813 – 31 October 1851), was a Serbian Orthodox Prince-Bishop of Montenegro (Metropolitan of Cetinje), who transformed Montenegro from a theocracy into a secular state. However, he is most famous as a poet. Among his notable works include “The Mountain Wreath” (Горски вијенац / Gorski vijenac), the “Ray of the Microcosm” (Луча микрокозма / Luča mikrokozma), the “Serbian Mirror” (Огледало српско / Ogledalo srpsko), and “False Tsar Stephen the Little” (Лажни цар Шћепан Мали / Lažni car Šćepan Mali).

Petar II Petrović-Njegoš was born Radivoje “Rade” Tomov Petrović on 13 November 1813 in the village of Njeguši, near Cetinje. His father was Tomo Markov Petrović, of the Petrović clan of the Njeguši tribe. The Petrović family had been the hereditary Serbian Orthodox Metropolitans (Prince-Bishops) of Cetinje since 1696. Growing up amongst illiterate peasants, he left his home at age eleven to be educated in the Cetinje monastery, at that time the only place of learning in Montenegro. Upon the death of his uncle, Petar I, Njegoš became the Prince-Bishop of Montenegro at the young age of seventeen. As a ruler and reformer, one of his greatest achievements was persuading the feuding clan chiefs of Montenegro to introduce fair taxation, as well as a codified set of laws based upon common rights, into their primitive mountain communities. He became a leading proponent of liberating and uniting the Serb people, willing even to concede his princely rights in exchange for a union with Serbia. He held the position of Prince-Bishop until his death of tuberculosis at the age of 37 in 1851. 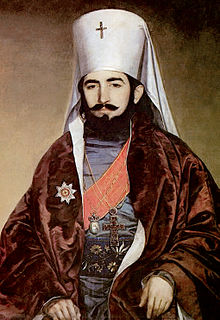 Despite his political achievements, Njegoš is arguably best known for his poetic and literary output. His writings drew on folklore, lyric poetry and biblical stories. He began writing poetry at the age of 16, and in his life he wrote numerous plays and works of epic poetry, including The Voice of Mountaineers (1833), The Cure for the Turkish Fury (1834), The Serbian Mirror (1835), The Ray of the Microcosm (1845), The False Tsar Stephen the Little (1851) and, perhaps most famously, The Mountain Wreath. It was written in Cetinje in 1846 and first published in Vienna in 1847.