The eleventh edition of the regional music festival Demofest, a mass gathering of unsigned bands in the South East Europe, has opened on Thursday in city Banja Luka. In the next three days, 26 unsigned bands from the former Yugoslav countries will compete for the title of the best.

The festival opened at the Stone House of the Kastel old town with the screening of a documentary that won the main award of the Belgrade’s Dok’n’Ritam festival. The documentary titled Captured Era describes the music and culture of Yugoslavia, the country that no longer exists, with some prominent names of those times appearing in the film.

The Stone House will host the daily programme of this year’s Demofest including the film screenings, exhibitions and lectures. 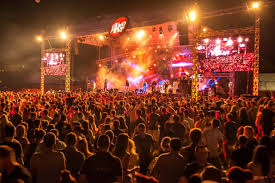 Twelve music bands including Djecaci, Magnifico˛The Serbian Army Orchestra and Wolfram will open the competition programme on the stage on Thursday evening.

Demofest is an annual music festival founded in 2008 and aimed at providing young music bands with an opportunity to revive the rock scene of the former Yugoslavia. It consists of a competition and non-competitive programmes, which in the previous years hosted the names such as Guano Apes, Kosheen, Stereo MCs, Fun Lovin’ Criminals and many others.