“Despot”, an armoured vehicle manufactured by Tehnički Remont Bratunac /TRB/ Company, was officially promoted at the “Partner” International Defence Fair of Weapons and Military Equipment on Tuesday in Belgrade in the presence of Serb member of the BiH Presidency Milorad Dodik and Serbian President Aleksandar Vučić.

The TRB presented on Tuesday two serial models of the “Despot” armoured vehicle at the Belgrade Fair, including an improved version of it. 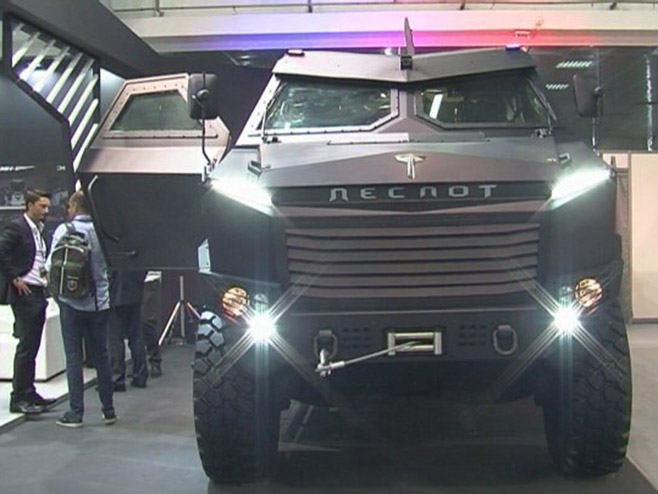 The vehicle’s serial models will be used by the Ministry of Interior of Republika Srpska, while the quality of the “Despot” vehicle was inspected by Minister Dragan Lukač at the Republika Srpska stand on Tuesday.

The prototype of “Despot” armoured vehicle, since its launch on January 9 for the Republika Srpska Day, has been perfected and has undergone 52 changes, while the most important are functional changes, from the entry ramp via armory to evacuation exits.

The TRB will also present the ammunition line at the Fair, which is the most important segment of the company’s business operations, the RS 9 pistol, while the visitors will have the opportunity to see humanitarian demining machine.

The “Partner” International Defence Fair of Weapons and Military Equipment began on Tuesday and will host 128 exhibitors, including exhibitors from Republika Srpska and BiH. Among the exhibitors from Srpska, besides TRB, Banjaluka’s “Kosmos” and Bijeljina’s “Orao” will be at the Fair.

The “Partner” International Defence Fair of Weapons and Military Equipment, which is the most important event of this type in Southeast Europe, will host 96 exhibitors from Serbia and 32 from abroad.

The Ministry of Defence of Serbia is a sponsor of the fair, co-organizer is Public Enterprise “Jugoimport SDPR”, with the Belgrade Fair as an executive organiser.