Home Social The Museum of the Old Orthodox Church in Sarajevo

The Museum of the Old Orthodox Church in Sarajevo originated from the Church Treasury. The Church patron Jeftan Despic was in particular responsible for the establishment of the Museum.

Despic came up with the idea to turn the Treasury into the Museum in 1889 after the National Museum was opened in Sarajevo. In order to implement the idea, the upper floor of the storehouse in the Church yard was decorated and was located on the right side from the southeast gate into the yard from the street.

The room in which the museum exhibits were located was sanctified on Sunday – May 13, 1890 – by Metropolitan Đorđe Nikolajević. On that occasion, the announcement of the Church Municipality was read, in which among other things it said:

“Museums are of great importance for the study and exploration of past and history of nations. We already have beautiful objects in our Museum in the Old Church that speaks of the past of Sarajevo. In order to entirely answers to his name, it is essential that people as well come to help the Museum because if each one of us gives a krajcar one forint will be gathered in a second – so too will be here. If everyone contributes with something we shall have beautiful museum that will be the pride of Serbs in Sarajevo and foreigners will see that we have had beautiful past and then we shall all make an effort to create even more beautiful future. This way, the Museum has another role which other museums do not have: This is the Church Museum and whoever makes a contribution, he/she does not give to the Museum only, but also makes contribution to the Church and therefore does good deed and charity to our Holy Church.”

The Museum stayed in the same location until 1939 when one of the Church storehouses within the complex of church buildings around the Old Church reconstructed and decorated for the purposes of the Museum.

The museum objects were transported to the new location and were enriched by new contributions by churches and private donors.

The new contributions were professionally processed, edited and presented by Vladimir Skaric, director of the National Museum in Sarajevo together with Prof. Djoko Mazalic and Darinka Despic. The list of exhibits was made by Vladimir Skaric.

During the Second World War the Old Church and the Museum were neither destroyed nor robbed thanks to the care of Dr. Jozo Petrovic who was then the director of the National Museum.

Since the room in which the Museum was housed was not satisfying, in 1954 there was an idea to adopt for the purposes of the Museum the former Serbian elementary school which had the entrance from the Church yard.

However, the plan was abandoned and the extension of the Museum ground floor was undertaken.

The construction works finished in the end of 1958 when the Museum was reopened with different museum exhibitions prepared by Petar Momirovic, curator of the Museum, and Prof. Svetozar Dusanic, manager of the Museum of the Serbian Orthodox Church.

Another extension of the Museum was done in 1975. Building “Daire” was denationalized and then adopted for the purposes of the Museum in 1975. The new Museum exhibition was prepared by the Protopresbyter Stavrophor Slobodan Radovic, Sarajevo priest and art historian. The Museum was dedicated to St. Martyr Tekla.

The items that are kept in the Church Museum can be divided into: old works of art, ancient manuscripts and printed books, ecclesiastical fabrics and embroidery, metal objects, liturgical items, old coins, ethnographical props of the votive character, old weapons, handcrafts, and the collection of the processed stone. 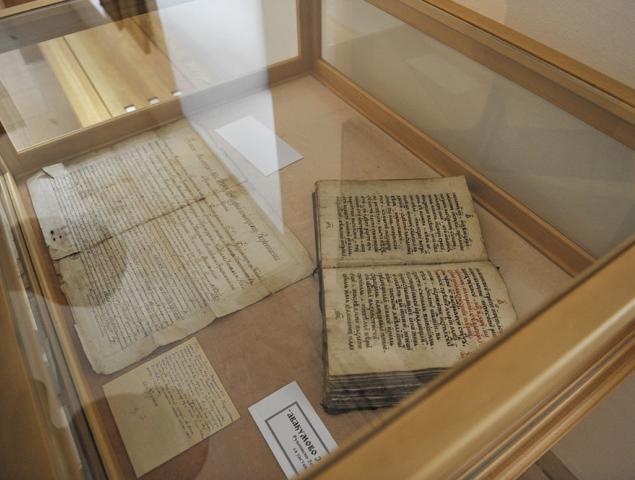 The most numerous items in the Museum are the works of local and foreign painters, such as: right wing of the emperor’s door of the Monastery Banja near Priboj with the image of St. Virgin Mary from 16th century; master-piece St. Kirijak Otselnik from the 17th century; damaged icon of St. John by Maksim Tujkovic; St. Stefan Decanski by the Baroque master Jovan Hadzi-Petrovic from 1797. The icons of the Italo – Crete school: Deisis – Prayer, and a range of icons of St. Virgin Mary, as well as the works of unknown Italo – Crete masters, then Gifts of Magi by the unknown master of the Venetian or Dalmatian painting etc.

The Museum also owns a considerable number of manuscripts and printed religious books of great historical and artistic value: the Sarajevo Krmcija on parchment from the first half of 14th century, the Siloan Gospel from the end of 14th century, and the Life of St. Sava of Theodosius, copied by priest Vladislav in 1508 in Mileševa.

From printed books, two Cetinje Book of Psalms by Djurdja Crnojevic from 1493/94 are preserved as well as the Book of Psalms from the Monastery Mileseve. There is a lot of embroidery in the segment dedicated to fabrics as well as clothes made of gold brocade, church hangings, embroidered and woven belts with buckles. Metal objects: shackles crosses from 17th and 18th century, hand censer, panagia, petohljebnica (fine-bread platter), local and Venetian lamps.

As for the money, the Museum keeps a considerable number of Dubrovnik, Turkish, Venetian, modern Austrian and Serbian coins. Object made of wood and processed stone are scarce. The first written information about the Treasury in Sarajevo were presented by Giljferding and the first monograph dedicated to the Treasury of the Old Church was written in 1936 by Dr. Lazar Mirkovic, professor of the Theological Faculty in Belgrade.