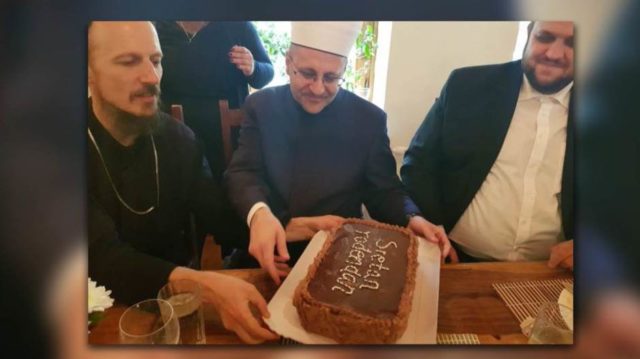 When it was time for dessert at the feast the Serb Orthodox monastery Zitomislici organised for a celebration, host abbot Danilo Pavlovic suddenly brought out a birthday cake and put it in front of his Muslim guest, local mufti Salem Dedovic.

The decade-long friendship between the two can serve as an example for what relations between priests of different religions whose believers shot at each other during the 1992-95 could look like – friendly.

“I knew that the two of us were born two days apart,” Pavlovic said.

The Serb religious celebration was close too and Dedovic was invited to attend it.

That was convenient “so I can organise a birthday party for him while he is attending the celebration,” Pavlovic said, adding that “this is not unusual for us.” Dedovic told N1 that his friendship with the Orthodox abbot is more than a decade old and the birthday surprise was part of it.

The monastery was opening its own little museum that day and although he was busy, Dedovic came to the celebration to congratulate the abbot.

Then the birthday cake surprised him.

It was not something they wanted to turn into a spectacle but someone at the celebration photographed the moment and the photograph leaked, causing many positive reactions.

There is a flood negative stories in the media and “there is astonishment when a story like this emerges,” said Dedovic.

Talking to N1 on Friday, the two said they travelled from Mostar to Sarajevo together and “during our trip, we thought about numerous joint projects we had. Most importantly, our cooperation was useful and had a positive impact in our religious communities,” Dedovic said.

“We are trying to present this as a real thing in life, this is no advertisement,” he said of the friendship and the projects. “There are a lot of beautiful and positive stories and they need to get attention.”

“But believe me, there are many stories like this or similar ones, even bigger ones,” he said, exemplifying it with visits Orthodox believers organise to the Madrasa in Mostar and their joint battle against insulting graffiti in the area.

Pavlovic said that the best result of their cooperation is that people recognise it.

“I figured out that those who have strong positions through nationalism always hide behind the people, and we see that the people want cooperation, that they react very positively to it and that the people have had enough of divisions,” he said. Pavlovic explained that no inter-religious organisation brought them together, but a “joint interest.”

Pavlovic and Dedovic have more in common than the time when they were born – both got their masters degree on the same day and both are recipients of the award ‘Mimar Mira,’ given out by the Mostar-based Centre for Peace and Multiethnic Cooperation.

“What we are doing here, we are doing in the name of God, for the good of our country and the people and we are here to provide hope. That’s the main path we must go and there are thorns on that path,” Dedovic said.

“We are not really doing anything that smart, new or big. We just want to be common people,” Pavlovic added.

Both of them also had messages for Bosnia’s citizens.

“Trust is a miraculous and magical word. We need to build that trust among the people and spread that value. So, faith, trust, hope, persistence – that is the path we must walk,” was Dedovic’s message.

“What we have in common – and we have a lot more in common than differences between us – is one God we believe in. There are no more gods, we all believe in the same God and we need to build unity based on that. We need to believe in the good in people and respect others and different opinions,” is what Pavlovic had to say.