Passing behind the construction fences and looking up at the freshly renovated façade of Serbia’s National Museum feels like entering a whole other world.

Dusty and buzzing with labourers, the building site is utterly at odds with the languor of Belgrade cafes at noon on a blistering summer’s day.

The bigger difference, however, is that between the museum’s living, breathing interior and its faded place in Serbia’s national psyche.

On June 28, after a 15-year absence, the chief repository of Serbian art and history reopened its permanent display to the public. 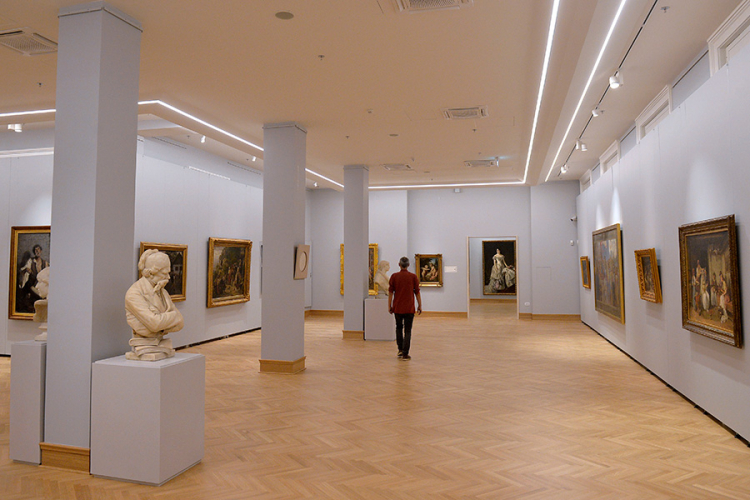 Lidija Ham Milovanovic, senior curator and head of PR at the museum, gave BIRN a preview ahead of the grand reopening of the building, home to some the most valuable artefacts in Serbia, Yugoslav-era art and a key institution in the shaping of modern Serbia’s culture and identity since its founding in 1844.

“The building was refurbished from the basement to the roof,” Ham Milovanovic explained in the imposing ground-floor atrium. “The installations were changed, new systems were introduced – security, fire-safety and air conditioning – without any drastic alterations to the building’s layout or size.”

Built in 1903 first as a bank, the building of the National Museum on Belgrade’s Republic Square is a listed monument, but, like much of the country, fell into disrepair during the closing decade of the 20th century.

“The building was already in a bad state and there were initiatives and appeals from the Museum for the building to be refurbished,” said Ham Milovanovic. “That didn’t happen and the board of the museum decided to remove the permanent exhibition in 2003; that decision was made because even the most basic conditions for holding exhibitions were not met.”

Ham Milovanovic was quick to correct a common misconception that the whole museum was shuttered for 15 years. In fact, temporary exhibitions were organised in the sturdier parts of the building until February 2015. Renovation work only began in earnest 12 years after the removal of the permanent display, in late 2015.

The decision not to make any larger alterations to the museum’s layout or size came after several ambitious projects to expand Serbia’s premier museum were scrapped. Ideas to move the museum to a different location, such as the Main Post Office Building, were also eventually abandoned.

EU should have rational approach towards the Balkans