Animated film “Ja imam pravo na Pravoslavlje” /I Have a Right to Orthodoxy/ produced by the Metropolitanate of Dabar-Bosnia Saint Peter of Sarajevo from East Sarajevo has won two awards at youth film festivals Light to the World and Bronze Knight in Russia. 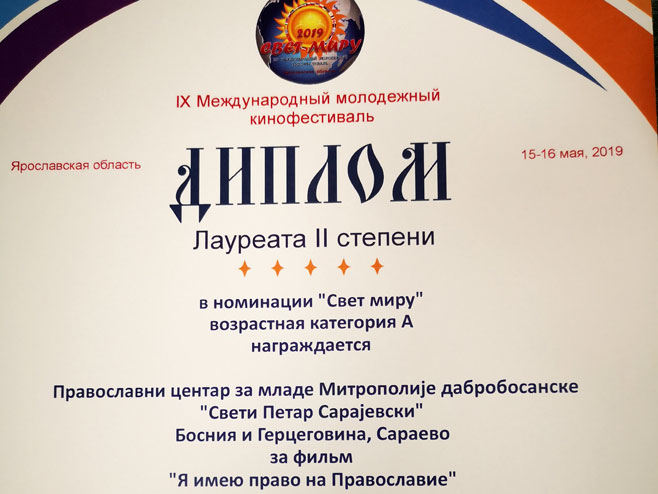 The Youth Orthodox Centre of the Metropolitanate of Dabar-Bosnia told Srna the film was awarded a laureate of the second degree in the category Orthodox Film for Children aged 7-15 at the festival Light to the World, which was held in the Yaroslavl region between May 15 and May 18.

It was presented the same award in the category Best Film on International Relations at the youth film festival Bronze Knight, which took place in Tomsk on May 17-18.

More than 300 films from Russia, Georgia, Belarus, Kazakhstan and Serbia participated in the two festivals.

The animated feature “I Have a Right to Orthodoxy” was developed during Animated Film School workshops carried out in cooperation with Studio Dom Animacije from Sremski Karlovci, Serbia and touches upon the topic of religious freedoms in Bosnia and Herzegovina, the goal being to inspire youth to respect the freedom of all believers in BiH to practice religion.