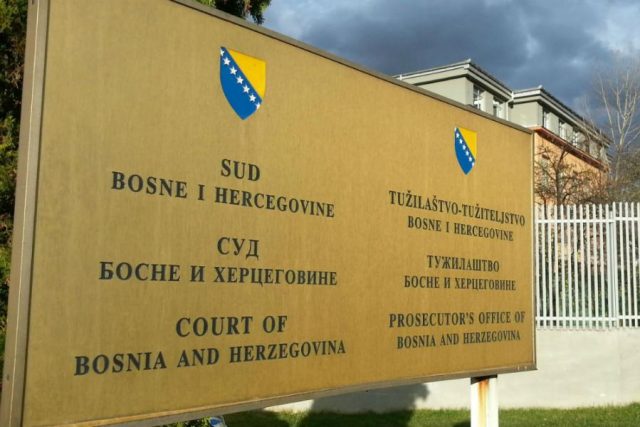 The Court of BiH has so far sentenced 111 Serbs to 1,646.5 years in prison, the Srpska Research Centre for War, War Crimes and Tracing Missing Persons told SRNA.
Before this judicial institution, 32 Bosniaks have been validly sentenced to 257, and 22 Croats to 208 years in prison.

The Court of BiH has so far confirmed indictments against 590 persons, of whom 347 Serbs, or nearly 59 percent.

The Srpska Research Centre for War, War Crimes and Tracing Missing Persons’ information on work performance of the BiH Prosecutor’s Office, the BiH Court, the ICTY, the entity courts and the courts in Serbia on war crimes committed in Bosnia and Herzegovina from 1992 to 1995, reads that the indictments for crimes against Serbs have been confirmed against 120 persons, and the indictments for crimes against Bosniaks have been conformed against 266 persons, of whom 207 Serbs.

Before the Court of BiH, the Serbs have been exclusively accused of genocide /40 persons/ and the indictments for crimes against humanity have so far been confirmed against 227 Serbs. The sentence pronounced against the Serbs for this crime is 1,176 years in prison. On the other hand, for the same crime, the indictments against 24 Croats and 3 Bosniaks have been confirmed.

For the time being, the Hague Tribunal has indicted 127 persons for war crimes in BiH, of whom 90 Serbs, 28 Croats and 9 Bosniaks.

Only 9 persons have been sentenced for crimes against Serbs before the ICTY, six of whom were sentenced to only 50.5 years in prison.

When it comes to the work performance of the entity courts and the Court of Brcko District on war crimes cases, the indictments against 478 persons, of whom 263,or 55 percent, are Serbs, have been so far confirmed. The same courts have so far sentenced 124 Serbs to 842 years and nine months in prison, and 69 Bosniaks to 342.5 years in prison.

Courts in Serbia have so far prosecuted 59 persons for war crimes in BiH, of whom 57 Serbs, 1 Bosniak and 1 Croat. 23 Serbs have been validly sentenced to 294 years in prison, while the persons of Bosniak and Croatian nationality have been freed.

The Ministry of Interior /MoI/ of Republika Srpska has filed 1,084 criminal charges in connection with war crimes /reports or amendments to criminal complaints and reports/until June 31, 2016.

The Srpska Interior Ministry has filed 1,440 reports on measures and actions undertaken and acting upon the BiH Prosecutor’s Office’s orders against the 7,712 persons reported for a reasonable suspicion that they had committed one or more criminal offenses of war crimes against more than 23,000 Serbs.

For crimes against Serbs in Posavina, the Court of BiH has so far confirmed the indictment against 4 Bosniaks and 17 Croats. Out of this number, 2 Bosniaks have been sentenced to 14 years in prison and 5 Croat to 31 years in prison.

Before the entity courts, 11 Croats and 18 Bosniaks have been so far sentenced for crimes committed against Serbs; 2 Croats to seven, and 10 Bosniaks to 42 years and eight months in prison.