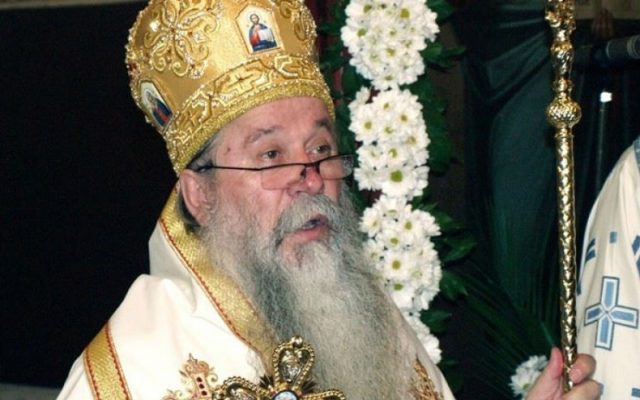 Metropolitan Hrizostom has told Srna that the Metropolitanate feels betrayed and sorry.

“We hoped we could take a road of unity. How shall we go together? I will go to Stari Brod na Drini to mourn victims of /Jure/ Francetić and the Cardinal will bring Bleiburg to Sarajevo. Well, these two things cannot go together! There are no more joint prayers for unity of Christians or any other relations,” Metropolitan Hrizostom said.

Regarding the announcement that Cardinal Vinko Puljić will head a mass on May 16 in the Sarajevo Cathedral for those killed in Bleiburg, Metropolitan of Dabar and Bosnia Hrizostom has said that this is extremely worrying.

“There was no mass on Easter, and look, there will be one for Bleiburg. Distorted values! Is this possible in a church?” asked the Metropolitan of Dabar and Bosnia.

He has said he does not understand the purpose of “bringing Bleiburg” to Sarajevo.

“Does it serve the good? No! It serves the evil I am afraid,” Metropolitan Hrizostom said.

Cardinal Puljić earlier said that Bishops of two Bishopric Conferences gave him a mandate to head a commemoration for victims of the Bleiburg cross-bearing road and for all other victims of war, which he accepted.

For years, commemorations in the Bleiburg Field in Austria, which are regularly attended by several thousand people, have caused numerous controversies. While some say this is the paying of respects for civilians and soldiers of the so-called Independent State of Croatia, the others say that this is the largest Fascist gathering in Europe.

The Bleiburg case, known as the Bleiburg massacre, pertains to an event from the end of WWII that occurred in May, 1945.

Tens of thousands of soldiers and civilians tied to the Axis powers who were fleeing Yugoslavia, were returned to the country. In Bleiburg, a town on the border between Austria and Slovenia, Yugoslav Army forces killed members or associates of the Fascist regime, and most of them were Ustashe and members of the Croatian Home Guard.