Home Culture “Bombing of Serbia disgusts me”: Once persecuted because of Serbs and justice,...

“Those who have bombed and killed thousands – they do not belong in Europe or on planet Earth,” was the message of author Peter Handke Austrian writer Peter Handke, 76, one of the most prominent German language and contemporary world literature authors, has been awarded the 2019 Nobel Prize for Literature. But in the past, he was ostracized from the intellectual community for his great friendship with Serbia and his attempts to defend the country during the 1990s.

In 1996, he traveled to the warzone in Bosnia and Herzegovina and wrote a fiercely contested essay, “Justice for Serbia,” in which he argued for a differentiated approach by Western countries and against blaming only the Serb side. After this, Handke was overnight banished from the global intellectual community. The first essay was followed by further work on the subject.

Handke’s essays about Serbia are among the most thorough and content-rich criticisms of the media written in recent years. For him, Serbia is only a metaphor, the reason for his literary and philosophical discussions about a “derealization of the world.” Unlike his counterparts and foes, who turned their backs on the Balkans while, keeping it trendy, rose up against the war in Iraq – Handke remained consistent: Serbia is that key metaphor for the distortion of truth through the media.

HE VISITED MILOSEVIC IN THE HAGUE, ATTENDED HIS FUNERAL

“Those who have bombed and killed thousands – they do not belong in Europe or on planet Earth,” was the message of author Peter Handke during an interview with RTS earlier this year.

In the last decade of the last century, while the war was still ongoing in the territory of the former Yugoslavia, he wrote the essay “Justice for Serbia” that was met with condemnation in some circles. He is also known as a controversial Austrian writer, an uncritical admirer of Milosevic, with one of the most criticized moves that he made being to attend the funeral of Slobodan Milosevic.

That was the reason why one of his plays was at the time “removed” from the Comedie-Francaise theater in Paris.

“My presence at Slobodan Milosevic’s funeral is a private matter,” Handke said at one point.

However, more than that, the public was shocked by his opinion of Milosevic, who he said was “not a nationalist at all” but instead someone who “wanted to preserve Yugoslavia.” “Respect” is the word he used to describe what he felt about Milosevic. He also said that Milosevic was “not a Balkan dictator and butcher.”

The friendship with Milosevic also seemed to be solidified when Milosevic found himself in The Hague, and Handke went there to visit him, as his lawyers asked him to possibly testify as a defense witness.

That the Austrian writer don’st mind socializing with Yugoslav and later Serbian presidents, is evidenced by his meeting with Tomislav Nikolic, who once thanked him for his efforts “to present the Serbs in the most authentic way to the world audience.”

“I FEEL A KIND OF DISGUST TOWARD THE HUMAN SPECIES” 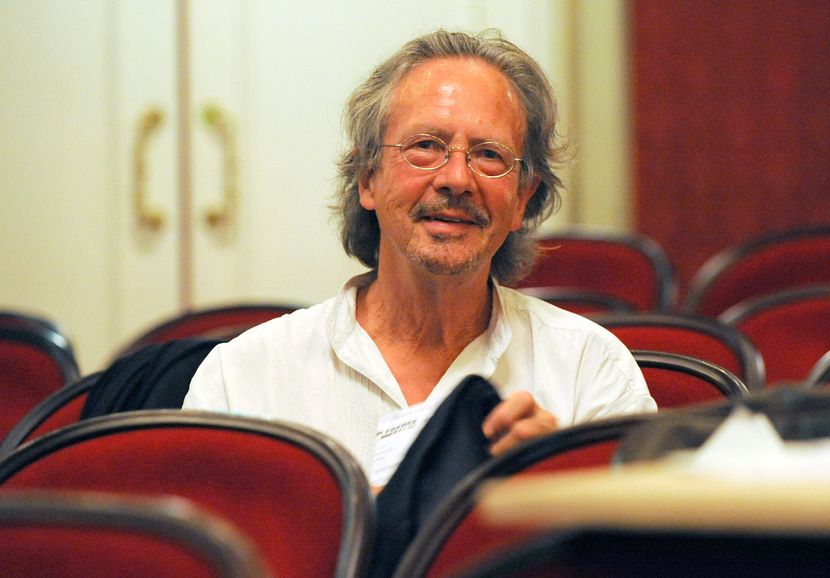 In the interview with RTS, Handke spoke about the bombing but also about how his readers understood his work outside the world of literature.

Responding to questions about how he views the bombing today and whether he feels anger or regret, he said he did not feel angry but still could not believe that it happened.

“It’s as if it wasn’t our planet… Those who bombed and killed thousands of people – they don’t belong in Europe or on planet Earth,” said the famous writer and emphasized that because of all this he feels “a kind of disgust towards the human species”.

Recalling the day the bombing began, Handke said he remembers it the same way he does the assassination of John Kennedy.

“Everyone was expecting the bombing to start, but when it really happened, it was like fiction, like it wasn’t real… But it became real! I remember everything. I was on the street, the wind was blowing, and there was a kind of silence all around,” Handke described his memory of March 24, 1999.

“Maybe that’s good, though I don’t really like it… Still, I don’t think I’m actually a persona non grata. There are many people, individuals, even in the West, there are those who have continued to read my books. I know they do, I get a lot of letters from my readers. The biggest impetus for me, actually, are the readers and I believe they will continue to read, not only my books, but just to read,” he told RTS.