The Christmas celebration in Serbia blends Christian symbols and pagan traditions and involves a lot of logs, straw, sparks, clucking – and hearty food.

While much of the Christian world celebrates the birth of Jesus on 25th December, in Orthodox Serbia church bells toll across the country marking the beginning of the three-day festival on 7th January.

Following the reform of the calendar in the 16th century, the Serbian Orthodox Church, along with the Orthodox Churches of Jerusalem, Russia, Macedonia, Georgia and Ukraine, continued to calculate time according to the outdated Julian calendar.

While people in these countries now generally calculate time using the updated Gregorian calendar, religious holidays are still celebrated according to the Julian one, two weeks later than the Catholic Church and protestant faiths.

However, preparations for Christmas in Serbia start long before 7th January. Many Orthodox Christians begin fasting 40 days before Christmas. Over that Lenten period, Serbs observe the rules of Lent and eat no meat, dairy products or eggs.

Some parts of Serbia still nurture old Christmas traditions that have disappeared from other parts of the country.

“Koleda” is considered a pagan tradition. The Orthodox Christian equivalent is “vertep”, which is similar and is practiced in Vojvodina on Christmas Eve and Christmas Day.

A group of costumed boys goes from house to house carrying a vertep, or litter, constructed as a wooden model of a house or a church, with two dolls inside – one representing the Virgin Mary, the other personifying the baby Jesus.

In front of each house they sing Christmas carols and recite poems praising the birth of Christ.

Christmas in Serbia is a family holiday, and the three Sundays prior to Christmas are dedicated to glorifying family members. The third Sunday before Christmas is dedicated to children, the second to mothers and the last to fathers.

These days see the celebrated family members receive gifts, but those presents come in the form of a ransom. On the morning of “detinjci”, adults bind their children and those of their neighbours, either to one another or to a chair, and the children must give the adults presents in order to secure their release.

On the mornings of “materice” and “oci”, the children tie up their mothers or fathers in the same fashion, and again only release them after receiving gifts.

While this tradition is mainly followed by families with small children, for many Serbs the real Christmas celebration starts on Christmas Eve, 6th January. This day sees even those who are not very religious observe Lent, avoiding meat, dairy products and eggs.

It all starts with an oak The oak tree is a crucial component of a proper Serbian Christmas and on the morning of Christmas Eve all Serbs go searching for a ‘badnjak’, an oak tree branch with golden leaves.

In towns and cities these branches are sold on streets or markets, but in the countryside people still spend this morning in the woods, cutting their own branches in the traditional way.

These oak branches are placed in front of the house until that evening. Before the family dines on Christmas Eve, the men bring into the house the badnjak, straw and pečenica – a traditional roast pork dish served on Christmas day.

In order to make the family home resemble the stable where Jesus was born, the men scatter straw across the floor, while mothers and children follow them, making clucking sounds.

The clucking in the Serbian tradition symbolises Christ’s wish to gather all people into one loving community, just as a hen gathers her chicks underneath her wings to keep them warm.

After the straw is scattered around the home, the family burns part of the badnjak in the house, provided they have a wooden stove or fireplace, or, if need be, in the courtyard of the apartment block or back garden.

The fire from the badnjak symbolises the fire that the three shepherds brought to warm the stable where Jesus was born.

In Serbian Orthodox tradition, the fire warms the family with love, sincerity and harmony, while the light from the fire simultaneously dispels the darkness of ignorance and superstition.

The roots of the Serbian cult of the oak long predate the arrival of Christianity.

According to some, before they adopted the Christian faith, Serbs worshipped a god called Badnja, and with conversion to Christianity they burned effigies of their old god. However, as they could not easily forget their beloved deity, they repeat the same act of farewell every year.

After the fire is lit, the family gathers around the dinner table. Christmas Eve dinner is substantial, but restrictions on what may be consumed still apply, so it is usually based around fish, beans, potatoes and dried or fresh fruit.

According to the Serbian tradition, family members only leave home after dinner to go to church.

The badnjak is burned in a huge fire at midnight in front of churches nationwide. Everyone brings an oak branch with them and throws it on the fire, making as many sparks fly as possible, as the sparks are believed to be a sign of good luck in the year ahead.

While some attend Church services, most Serbs stay at home, impatiently awaiting the first visitor, the položajnik.

Instead of greeting each other with the usual “hello” or “good day”, Serbs use the traditional festive greeting of “Christ is born, happy Christmas” for all three days of Christmas. The appropriate response is “Truly, he is born.”

The “položajnik” must enter the house with the right foot first, as this will bring the family good luck in the coming year.

The tradition of the položajnik symbolises the three wise men from the East who came to worship the baby Jesus, and many people arrange for someone they cherish to be the first to cross their doorstep.

On entering the home, the položajnik lights up the rest of the badnjak and makes sparks fly. The more sparks from the fire, the richer, healthier and happier the family will be. The položajnik is then served with breakfast and when he – traditionally it should be a male – rises to leave, the family bestows presents on him, in order to show how special he is to them. 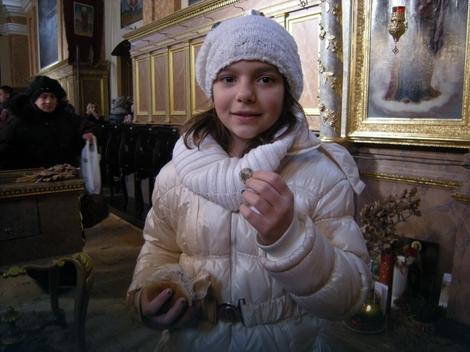 The next step in the celebration is Christmas Day lunch, which is the highlight of the day. Before the meal begins, the family breaks a special loaf of bread, the česnica, a homemade loaf baked with a coin inside.

Although many families now order the loaf from the nearby bakery, the baker still makes it with an obligatory coin.

Before the meal starts, the family breaks the bread into pieces and each person starts searching for a coin in his or her slice. Good luck for the coming year is guaranteed for whoever finds the coin.

The hunt for the coin is followed by a prayer; only then can lunch start. The meal is rich. Appetizers made of pršuta (smoked ham), cheese and pies, are followed by the main course of pečenica (roast pork), sarma (cabbage stuffed with meat and rice) and several kinds of cakes.

Preparing pečenica is also rooted in pre-Christian rituals. Traditionally, the pig should be slaughtered on the morning of Christmas Eve and roasted for the whole day over an open fire. In these modern times, the pork is more commonly prepared in an oven when the host has time.

There are two beliefs about what the family should do after lunch. Some believe that every task a person begins on Christmas Day will be blessed, so they start the job that they intend to occupy them throughout the year. Others, meanwhile, believe that a person will continue doing whatever they do on Christmas throughout the year, so most Serbs believe it is best to spend the day doing things they enjoy the most with the people they love the most.

The Christmas celebration does not end on 7th January, as this is a three-day festival. On the second day families visit their neighbours or relatives, while on the third day the straw is removed from the house and hung in bundles from fruit trees, to ensure a fertile year.

Another bundle is stored in a dry place and burnt only on St George’s Day, to protect the crops against hail. A third is left by the nearest stream and expedites the elimination of vermin present in the house.