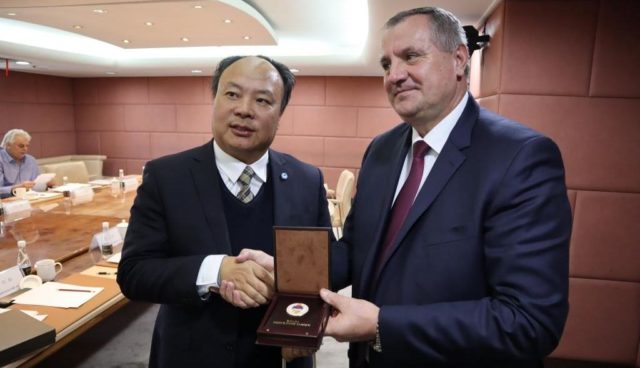 Prime Minister of Republika Srpska Radovan Višković stated that he will sign a contract on Wednesday with China National Aero-technology International Engineering Corporation /AVIC/ about the construction of three hydro power plants on the River Bistrica and a metal pipe factory in Foča.

After talks with AVIC management, Višković stressed that the value of the contract for building hydro power plants with the installed capacity of 45 megawatts is EUR 90 million, and that it will be a turnkey project.

“In the package is also a factory that will produce big-size metal pipes which will be built in Foča, with AVIC a 100-percent owner. Such pipes are mainly used for building hydro power plants; the factory will also produce construction panelling and some other products,” underlined Višković.

He says they also discussed the possibility of producing metal pipes for the gas pipeline network in Srpska, but that more talks lie ahead about the matter.

The Srpska prime minister pointed out that once the contracts for building hydro power plants and pipe factory were signed, he would meet with representatives from the National Bank of China to discuss the funding for the projects.

It was agreed in the meeting between the Srpska Government delegation and AVIC management headed by Chairman Suo Shuhe to develop an analysis of the project technical documentation for a cement factory in Ugljevik, added Višković.

“We will also sign a memorandum with the same company for doing a feasibility study for building an airport in Trebinje. After that, we will have a clear picture about the price, number of passengers and see whether the project is economically justifiable. If it proves economically justifiable, we will then form a joint company with AVIC to build and implement the project in which we will be 50-percent owners,” says Višković.

He noted that they had presented information to the Chinese partners about a deposit of silica sand in the vicinity of Bratunac and possibilities for building a factory that would produce flat glass in Podrinje.

“In that case, project and technical documentation has to be made,” Višković explained.

According to him, they had suggested to the Chinese partners a cooperation with defence industry enterprises Orao from Bijeljina and Kosmos from Banjaluka.

“The Chinese partners will come to visit the two companies early next year and suggest a possible cooperation. We also had a meeting with the head of the China National Aero-Technology Import & Export Corporation /CATIC/ Yang Sin regarding our two defence industry enterprises, their future jobs and placing their products in third countries’ markets,” said Višković.

He said that they had also met with Government representative Chi Jing, who is the President of the Beijing committee of the Communist Party in charge of the implementation of international projects.

“We asked her to make sure China gives the green light to AVIC to continue talks with Republika Srpska about all these projects,” said Višković.

He asserted that all the meetings had been held at a high level and that the delegation of the Republika Srpska Government had been welcomed warmly.

“I hope we will be able to discuss implementation of these projects very soon and that our Chinese partners will soon decide to implement the projects we discussed,” emphasised Višković.

He added that until the end of his visit, he would also meet with representatives of the companies which expressed an interest during the Srpska delegation’s stay in China in discussing the projects they were interested in.

AVIC is among China’s top five companies which employs more than 550,000 people; in the civilian programme alone, its annual profit is USD 67 billion and it does business in more than 200 countries and regions.

It is mainly engaged in civilian and military aerospace industry, as well as the production of construction materials, agriculture, electronics, car industry, energy and infrastructure.

Other members of the Republika Srpska delegation are Minister of Energy and Mining Petar Đokić and Elektroprivreda CEO Luka Petrović.