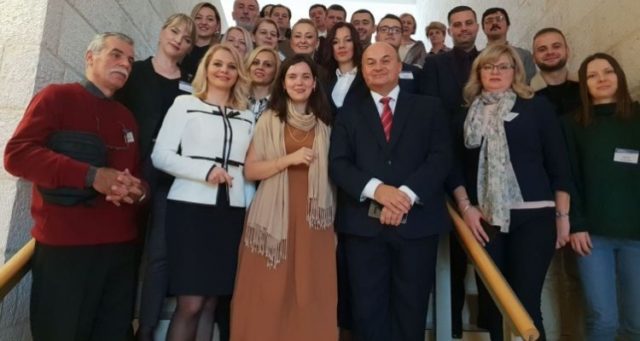 Republika Srpska Education and Culture Minister Natalija Trivic is on a two-day visit to Israel. Trivic spoke with Israeli Minister of Education Rafi Peretz today about the possibilities of enhancing cooperation in the field of education and culture.

They expressed mutual satisfaction with the cooperation between the Ministry of Education and Culture of Republika Srpska and the International Holocaust School in Jad Yours.

“The importance that Jad Vas has in the memorial context is immeasurable and incomparable with any other place in the world, and that, through a scientific-research approach, they have best contributed to spreading awareness about the culture of memory and memory,” said Minister Natalija Trivic.

She emphasized that the knowledge that professors of history and Serbian language and literature from Republika Srpska acquire in Jad Yours is very important, especially since the Serbian people throughout history have also experienced Golgotha ​​and great suffering.

“It is our duty to properly educate the young generations about the suffering, especially the Donji Gradina site, as well as other memorial sites, in order to nurture a culture of memory and memory,” said Minister Natalija Trivic and expressed her satisfaction that the Jad Vas Memorial Center On January 27, at the Museum of the Republika Srpska, host an exhibition titled “Shoa – How Humanly Possible” dedicated to International Holocaust Remembrance Day.

Minister Natalija Trivic also attended the opening of a seminar for professors of Serbian language and literature and history on the Holocaust study, which was organized at the International Holocaust School of Jad Yours in Jerusalem.

She emphasized that the new knowledge that professors receive about the principles and methodology of this type of education will be used to a great extent in the formation of a contemporary approach and form of teaching practice in the transfer of knowledge about the suffering of the Serbian people, who through history have experienced Golgotha ​​and great tribulations.

“Professors gain the knowledge they need to insist on applying them to our educational system, namely: how to teach students about the Holocaust and suffering through examples from the arts, through the analysis of literary and literary texts, films, pictures and testimonies, and especially visits to memorial sites and execution sites, especially in Republika Srpska, ” Trivic explained.

There are 20 professors of history and Serbian language and literature in Jerusalem, as well as representatives of the Republican Pedagogical Institute of Republika Srpska, who attend a seven-day seminar on Holocaust studies at Jad Your International Holocaust School.