Moored at a dock in the Adriatic Sea port city of Rijeka, the Galeb (Seagull), best known for being used by the Yugoslav President, Josip Broz Tito, as his official yacht, is waiting for a makeover to restore its splendour and turn it into a museum.

Ahead of the expected opinion next year, the dock is currently closed to the public and curious visitors can only take glimpse through the fence at the 117-metre-long vessel on which Tito used to host various potentates from around the world.

Natasa Babic, a curator from Rijeka City Museum, which is in charge of the Galeb’s conservation, told BIRN that the vessel still evokes a lot of interest among visitors.

“It’s now in a very poor condition in the Baros Harbour area where it is inaccessible to visitors, but groups of tourists are still looking at the ship through the fence, showing interest, and asking tour guides to take them there and to show them the ship,” Babic said.

The dilapidated ship should be restored and transformed into a museum as Rijeka becomes European Capital of Culture in 2020. The Museum of Rijeka has already begun collecting restored pieces of the ship’s furniture while the project’s managers are looking for a company to renovate the rusting hulk.

Rijeka’s Department of Culture told BIRN that the ship is a valuable example of shipbuilding heritage, “with the added historical significance of its various roles in history”.

“Although perhaps the most famous as Tito’s Galeb, this boat actually has a very interesting biography that is worth of attention,” it said. 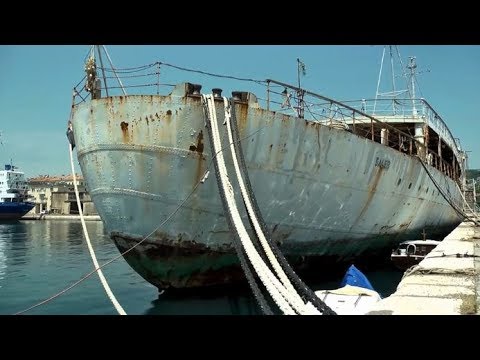 The Galeb was built in Italy in 1938 by an Italian state company called Ramb. Its intended role was to transport bananas to Italy from its southern African colonies.

“However, the boat did not actually do so, it never transported a single banana because it was launched [just] before the outbreak of WWII,” Babic said.

At the beginning of WWII, the Italian Navy took over the ship and converted it for military purposes into an auxiliary cruiser.

During the war, the ship was seriously hit twice – first by torpedoes from a British submarine in the Libyan port of Benghazi.

As Italy capitulated in September 1943, the German army took over the ship, converting it into a minelayer and changing its name to the Kiebitz. Allied forces then sank the ship near Rijeka in 1944 and it spent three years at the bottom of the sea.

The vessel was rehabilitated for a second time and in the newly-established Socialist Federal Republic of Yugoslavia, and designated for use as a navy training ship. Its present name, Galeb, dates from the 1950s, when Tito started to use it for diplomatic voyages.

The Galeb is perceived by the public as a luxury yacht, and it’s often said that Tito used it to host stars such as Sophia Loren, Elizabeth Taylor and Richard Burton, who played the Yugoslav president in the 1973 film ‘Battle of Sutjeska’. However, the staff of the Rijeka City Museum have not found any evidence that any of these world-renowned actors ever set foot on board the ship.

The Yugoslav leader made 14 voyages with the Galeb, also known as ‘The Peace Ship’, visiting 18 countries on three continents – Europe, Asia and Africa.

He use it for high-level diplomatic meetings, hosting powerful figures like Jawaharlal Nehru, the first prime minister of India, Gamal Abdel Nasser, the president of Egypt, Haile Selassie, the Ethiopian emperor, Sukarno, the first president of Indonesia, and Muammar Gaddafi, the leader of Libya.

“[Tito’s] first journey was in 1953, to London – a very important journey because Yugoslavia, after that historic ‘no’ to Stalin [his refusal to accept the Soviet Union’s supremacy in the Communist world, which led to a split with Moscow in 1948], had entered into a kind of isolation in which it did not communicate either with the West or with the East,” Babic said.

“Indeed, this trip in 1953 was a sign of a new orientation for Yugoslavia, kind of turning to the West, of course not entirely, because it remained a Communist country, but in any case, it was a Communist country seeking a new, different path [compared] to other Eastern Bloc countries,” she continued.

Babic said that one crucial journey made by the Galeb began in November 1954 – a voyage to India and Burma which marked the creation of the Non-Aligned Movement, an international organisation founded by Tito and comprising countries that did not belong to either NATO or the Warsaw Pact.

Waiting for a makeover

After the break-up of Yugoslavia, the Galeb sailed to Boka Kotorska in Montenegro, and in 2000, the Montenegrin government sold the ship for 750,000 euros to Greek businessman John Paul Papanicolaou.

“He brought [the Galeb] to [Rijeka’s] Viktor Lenac shipbuilding facility, alongside one of his other ships. However, [Papanicolaou] ran into great financial troubles, failed to complete the project to renovate these two ships and in fact, ceased to be the owner of the [Galeb],” Babic said.

In 2006, the Galeb was proclaimed to be an object of Croatian cultural heritage and three years later, was bought by the city of Rijeka.

The city announced the reconstruction of the ship, which will be co-financed with EU funds as part of a project intended to preserve significance examples of local industrial heritage

“It’s estimated that the reconstruction and conversion of the Galeb into a ship-museum will be 33.6 million kunas [4.5 million euros], while for restoration work on the interior design of the Galeb, an additional 1.6 million kunas [216,824 euros] is needed,” Rijeka’s Department of Culture told BIRN.

However, for some time the city has not been able to find contractors who would agree to do the job fo the estimated price. The only offer came in January from the Viktor Lenac shipyard and it amounted to almost to 60 million kunas (8.1 million euros), which the City of Rijeka deemed too much.

The city has reopened the tender for the reconstruction of the ship, and is seeking bids until the middle of August.

Rijeka’s Department of Culture said that taking into account the time needed for the bids to be evaluated and the contracts to be concluded, the restoration work on the Galeb should be complete in December 2020.

As well as being a museum, the ship will be used for commercial purposes.

“Seventy per cent of this space will become a museum, meaning it will be open to the public and we are working on a permanent exhibition…. and [the rest] should become a hostel; there will be accommodation facilities and a restaurant open to everyone,” Babic explained.

The permanent exhibition will be dedicated to Tito’s journeys and to the role of the Galeb in the development of the Non-Aligned Movement, but will also explore the ship’s connections with Rijeka’s history.

“Today, the Galeb is one of the most exciting stories in Rijeka and the interest of foreign journalists in this ship has not diminished for years. When it is renovated and repurposed, we believe that it will be a first-class cultural and tourist attraction for Rijeka,” the Department of Culture said. “It does not deserve anything less.”