What is the situation of the Serbian minority in Croatia? In conversation with Dejan Jović, university professor and recent candidate in the European elections

A university professor of International relations at the universities of Zagreb and Belgrade and former advisor to president Ivo Josipović, Dejan Jović was a candidate in the European elections of last May 26th with the Serbian Independent Democratic Party (SDSS), which represents the Serbian minority in Croatia. For its electoral campaign, the SDSS decided to use posters with slogans in Latin and Cyrillic characters, which were systematically torn and covered with abusive writings. We talked to Jović about the European elections and the situation of the Serbian minority in Croatia.

In the last European elections, the SDSS obtained 2.7% of the votes. Are you satisfied with the result?

We were hoping to get a seat, so I would say that we did not get what we initially hoped for [the threshold for European elections is 5% in Croatia, ed.]. However, I regard the campaign as a success, for at least two reasons. On the one hand, we managed to draw the attention of Croats to the problems and discrimination faced by the Serbian minority. On the other hand, we increased the participation rate among voters, convincing more Serbian voters to go to the polls.

Let’s start from the first point – how did the electoral campaign shed light on the discrimination perpetrated against the Serbs?

Our impression, before the campaign, was that discrimination against Serbs was ignored by most of the population. Then, with these posters around the country and the hate messages and threats that appeared on them, it is as if we had put a giant collective mirror before the face of the nation. We asked a simple question, “do you know what it means to be Serbian in Croatia?”. And what we collected was a lot of hate speech. Fortunately, there were also so many messages of support from leading figures in Croatian society, such as former national football coach Ćiro Blažević, or former president Stipe Mesić and many protagonists and representatives of the cultural world. 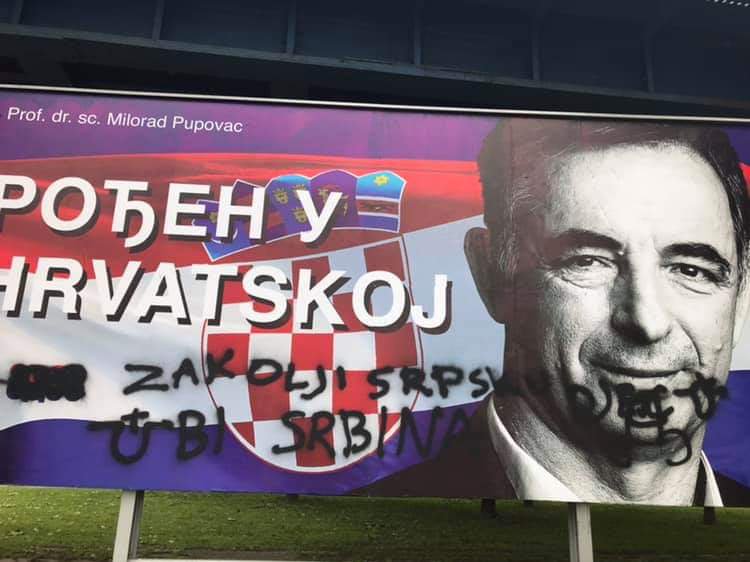 How many billboards did you post around the country? How many were attacked?

We posted 73 electoral billboards across the country and I would say that most were attacked with words or symbols referring to the Independent State of Croatia (NDH), the Ustasha movement, or threats of any kind. Only on one poster we found a message of support, written in response to a previous threat.

Why so much hostility towards Cyrillic?

It is the result of the social and political climate in the country, which pretends not to see the growing anti-Serbian rhetoric and keeps the war of the 1990s alive. Just watch Croatian TV – every day, on the news, there are 10/15 minutes devoted to the war and it is a celebration, they don’t just commemorate it. The Serbs are systematically called “aggressors” and “invaders”, and this goes for schoolbooks too. It is not surprising, therefore, that this influences the new generations and that in this climate, where the cult of Tudjman is making a comeback, attacking a Serb is almost an act of heroism. If nothing is done, if the main political figures do not condemn these behaviours, we will see more and more of such attacks.

Was there a condemnation of attacks on your electoral posters by prime minister Andrej Plenković or head of State Kolinda Grabar-Kitarović?

No, no condemnation. And if on the one hand I can understand the silence of the prime minister, engaged in the electoral campaign himself, on the other hand I cannot justify that of the president, who is tasked with strengthening the unity of the country. Those who attacked us are certainly a minority within Croatian society, but it is important that the majority does not remain silent in the face of this phenomenon, we must not pretend that nothing is happening. Our campaign wanted to be an alarm call for Croatian society.

Why did you decide to use Cyrillic for your campaign?

We assumed that everyone in the European Union must be free to be themselves. Yet, in Croatia, using Cyrillic – even where it is guaranteed by law, as in Vukovar – is impossible. Let’s look at Istria, where signs in Italian are posted without any problem. 25 years after the end of the war, we must be able to apply the same rules also to the Cyrillic alphabet.

The second reason that led us to build the campaign in this way is the consideration that the last time the Cyrillic was banned in Croatia was during the Second World War. We cannot therefore allow the de factorepetition of what happened during the Ustasha regime. Ours is therefore also an anti-fascist action.

Personally, what prompted you to run as a candidate?

First of all, the desire to influence European politics. As an academic, I have worked a lot on relations between the European Union and the Balkans. I have expressed myself repeatedly, openly, against the EU’s hesitations regarding the integration of the Western Balkan countries. I see the slowdown in the enlargement process as a serious mistake and support insteada simultaneous and rapid accession of all the countries in the area. I told myself that by sitting in the EP I could have pursued my stance more forcefully.

Secondly, I think it is our duty, as academics, to take part in political life. There is a tendency to discourage civic engagement – a trend that in the long term becomes a serious danger to democracy. Those like me who study political phenomena have a duty at a certain point to actively participate.

You said that, despite the inadequate electoral result, the SDSS managed to get more voters involved. What was the increase you are referring to?

In Croatia there are about 138,000 Serbian voters who identify themselves as such. Of these, 41,000 took part in the elections and 30,000 voted for us. It means that almost a third of the electorate went to the polls. It is a good result compared to the past.

Beyond what the SDSS managed, how do you interpret the results of the European elections in Croatia as a political scientist?

I would say that, despite the slight downturn registered, both the HDZ and the SDP managed to win two-thirds of the seats available to Croatia. Therefore, they remain the main political players in the country. Secondly, I am concerned by the rise of the extreme right and the fact that Ruža Tomašić is Croatia’s most voted MEP. Recently, the weekly Novosti revealed to what extent Tomašić is a revisionist, having celebrated the figure of Ante Pavelić in the past, but this does not seem to trouble the public. Finally, the leftist movements, even if they failed to win a seat, performed well. It is a starting point on which something can be built.

What do you see in your political future and the SDSS’?

The SDSS wanted to present itself as a progressive, liberal party rather than a mere community party – the reason is that we interpret the national question as an equality issue. In the future, I think that the SDSS could ally itself with other leftist parties like Možemo or even with the SDP, if the latter is interested. As for me, I don’t think of becoming a full-time politician, I will continue my career as a professor, but should a new opportunity arise I am ready to make my contribution.