Politicians often stand accused of being out of touch with ordinary people. But in Denmark, things are a little different.

For four days a year, Danes can rub shoulders with politicians, and even the prime minister, at Folkemødet (The People’s Meeting). 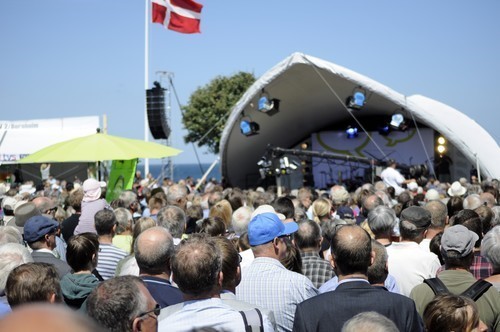 Each June, members of the public mingle with politicians, policymakers, local government officials and leaders of companies and non-governmental organizations at the festival on Bornholm, Denmark’s easternmost island in the Baltic Sea.

All the political parties attend, and have the chance to give a major speech and debate current issues.

In 2018, over 100,000 festival goers took part in over 3,000 events, including lectures, debates, workshops and performances. Everything is free, and all events are within walking distance.

The festival, founded in 2011, was inspired by the Swedish Almedalen Week, which celebrates its 50th anniversary in 2018.

As well as talking politics, many business leaders attend to discuss things like infrastructure, climate change, energy and social issues.

Despite the chilled-out ambiance, festival-goers don’t shy away from asking politicians difficult questions.

The New York Times reported that the most popular topics in 2018 were health, democracy and youth.

In addition, 82% of attendees said they had gained new knowledge of political issues, and 62% said that the festival had inspired them to become more active in politics.