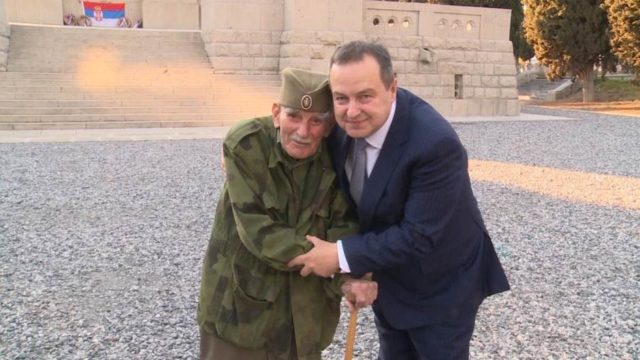 During Ivica Dačić’s visit to Zeitenlik, Đorđe Mihailović complained that he doesn’t have Serbian citizenship.

Foreign Minister Ivica Dačić has visited the Hilandar House in Thessaloniki, where he met with representatives of the Hilandar Monastery, to then visit the Zeitenlik Serbian military cemetery, where he laid a wreath and paid his respects once again to the Serbian soldiers fallen during the breakthrough of the Macedonian Front in the First World War.

He was greeted at the cemetery by the famous Đorđe Mihailović, a 90-year-old who has been taking care of the tombs of Serbian heroes for decades, as his father Djuro and grandfather Savo did before him.

Uncle Đorđe, as he is known in Serbia, complained to Minister Dačić that although he is of Serb descent and his family has been in charge of the Serbian soldiers’ cemetery for decades, he had never been in Serbia and doesn’t have Serbian citizenship or passport.

Dačić promised that the Ministry would help him become a Serbian citizen and issue him with our passport in an expedited procedure.