Home News Dodik: Cooperation between Srpska and Russia in all areas 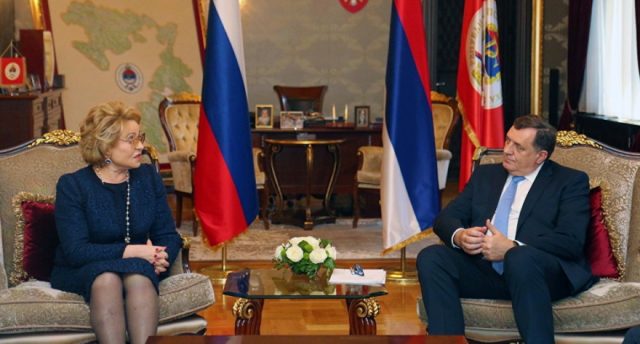 President of Republika Srpska Milorad Dodik says the cooperation between Republika Srpska and Russia is achieved at a high level in all areas – the political, economic, humanitarian, cultural, healthcare and every other area.

“It is our wish to make those relations more eventful and better and we highly appreciate the Russian Federation, its engagement in the Peace Implementation Council in Bosnia and Herzegovina and its permanently principled stance regarding the Dayton Peace Agreement as an international treaty that needs to be observed and not amended,” Dodik stated in his address at a solemn session of the National Assembly held during an official visit by a delegation of the Russian Federation Council headed by Chairwoman Valentina Matviyenko.

Dodik pointed out that Srpska always had the help of the Russia’s stance that the Dayton Agreement, its letter and spirit needed to be respected.

“That gave us strength and an opportunity to fight for our rights. A true friend, such as the Russian Federation, and its President Vladimir Putin have stood by us for a long time and allowed us to clearly define our views, restore our self-esteem and fight for our genuine right,” said Dodik.

The Srpska president said that the fact that Russia respects all countries in the world regardless of their financial, territorial or other criteria proves that it supports everyone’s efforts in maintaining world peace and order.

On behalf of Republika Srpska, he thanked Russia for its principled behaviour in the UN Security Council when the points regarding the implementation of the peace treaty in BiH were on its agenda.

“We could then count on an objective and unbiased interpretation of events, at the expense of those who were negative towards us upon rule, which were reported by the Sarajevo media and only transposed to the Security Council session,” said Dodik.

He expressed special gratefulness to Russia and its President Putin and his associates for vetoing the British resolution on Srebrenica which was supposed to declare the Serbs a genocidal nation.

Dodik said that without the Russian veto, the Serbs would not have been able to defend themselves from the British attempt to place them on the dark side of history at the end of the 20th century.

“The Russians know best who the Serbs are, that we belong to the Orthodox, Slavic world, that through history we were always on the side of winners and never on the side of evil and the Russians did not find it hard back then to take such a significant measure such as the veto in the UN Security Council,” said Dodik.

He noted that Srpska was grateful for many support measures in agriculture, where the cooperation does not reflect only in the well-known arrangements like the oil and petrol refineries in Modrica and Brod, but also in the achieved agreements to build a gas-related plant in Zvornik, and reconstruct the dilapidated thermal power plants, in regard to which agreements will be signed at a forum in Saint Petersburg in May, which is held under the auspices of the Russian president.

Dodik recalled that an agreement on cooperation between the faculties of medicine from Russia and Srpska were signed in the Russian city on Monday and expressed a wish that cooperation be established in the procurement of medicines, given that Russian medicines are 25 per cent cheaper on average and made in accordance with European standards.

The Srpska president also noted that the friendship between the Serbs and Russians had been manifested in many tragedies and sad events from the common history, which was recorded in great victories from the two world wars, where these nations were the greatest victims.

“Without the Russian Federation and its help and attention, Republika Srpska would have much more problems. I am grateful for everything that has been done regarding the approval of scholarships for students form Srpska and BiH studying in Russia, for the commitment to talk about engaging the Orao Overhaul Institute which is supposed to be a service centre for Russian helicopters in these parts and in the region,” said Dodik.

He is also grateful for all initiatives coming from Russia, as well as to Saint Petersburg, the partner city to Srpska in many other issues and affairs.

“Ms Matviyenko, we wish you a pleasant stay in Republika Srpska. Your arrival is a great honour for us. Your presence has brought us important messages from your president. With a wish to make our cooperation stronger, I would like to once again welcome you and your delegation and your respected country. Long live Russia, long live Republika Srpska and long live our friendship,” said Dodik.

Chairwoman of the Federation Council of the Federal Assembly of the Russian Federation Valentina Matviyenko stated Tuesday in Banjaluka that an enormous credit for building the mutual relations between Republika Srpska and Russia belongs to Srpska President Milorad Dodik.
Matviyenko said that Dodik was a frequent guest in Russia, that he was very popular there and had contacts with President Vladimir Putin, Prime Minister Dmitry Medvedev and other important politicians and businessmen, which resulted in numerous implemented projects in the oil and electricity sector.

She said that the political ties and other relations between Srpska and Russia were friendly and strong, that joint projects were developed by efforts from both sides.

“Those projects are very intensive and dynamic,” Matviyenko said at a ceremonial session of the National Assembly of Republika Srpska held for the official visit of a delegation of the Federation Council, the upper house of the Russian parliament to Republika Srpska.

Matviyenko said that big Russian companies like Zarubezhneft and Gazprom were seriously working to develop the economy in Srpska.

“Srpska’s leadership is creating a favourable business climate in the spirit of our friendly relations,” she said.

Matviyenko qualified it as important that the Russian cultural centre of the Russian World Foundation opened in Banjaluka, where people from BiH and Srpska can learn about the Russian language and culture.

Matviyenko said that the number of scholarships for students from Srpska and BiH with internships in higher education institutions in Russia grew by the year and that the trend would continue.

She announced that building the Russo-Serb Orthodox church in Banjaluka would foster mutual friendly relations.

Matviyenko recalled the spiritual unity of Serbs and Russia in Orthodoxy, the joint struggle against fascism and culture of remembrance, saying that the Serbs and Russians were state-building and constituent nations.

“The 1389 Battle of Kosovo left a deep, sad mark in the Serbian history but despite the pressure of the Ottoman Empire, the Serbs managed to preserve their faith and desire to live in freedom and in their own state,” Matviyenko pointed out.

She recalled the Serbian proverb “God is in Heaven, Russia on Earth” and added that the Russians helped the Serbs achieve independence and recover their statehood.

“The Serbs remember that and we appreciate it,” said Matviyenko.

Russia pursues an independent foreign policy while the West has chosen a wrong path, giving up the principle of international law, respect for equality and sovereignty of countries, she said.

Matviyenko underlined that Russia was trying to prevent the spreading of terrorist threats in Syria.

Moscow’s growing power in the international scene has lead to an information warfare against Russia, which is proved by an alleged assassination on the former Russian agent Sergey Skripal, which, as she said, was fabricated.

Matviyenko said that every country had the right to cooperate with whomever it wanted and that it should not be given ultimatums like the “EU or Russia” one.

“The world and Europe need a peaceful dialogue and compromise and we wish all peoples in BiH and the brotherly Srpska peace, unity, happiness and prosperity,” stated Matviyenko.

She thanked for the Order of Republika Srpska on a necklace presented to her by Republika Srpska President Milorad Dodik, saying it was a great honour and that she would do everything in her power to make sure the relations between Srpska and Russia developed even more successfully.

“I will make sure this decoration is well deserved,” said Matviyenko.

Speaker of the Srpska National Assembly Nedeljko Cubrilovic said that the visit by the high-level Russian delegation confirmed the firm connection between the Serb and Russian people, as well as the good relations and cooperation between Srpska and Russia.

He thanked Matviyenko for her visit and kind words and the Russian Federation and its President Vladimir Putin for supporting Republika Srpska.