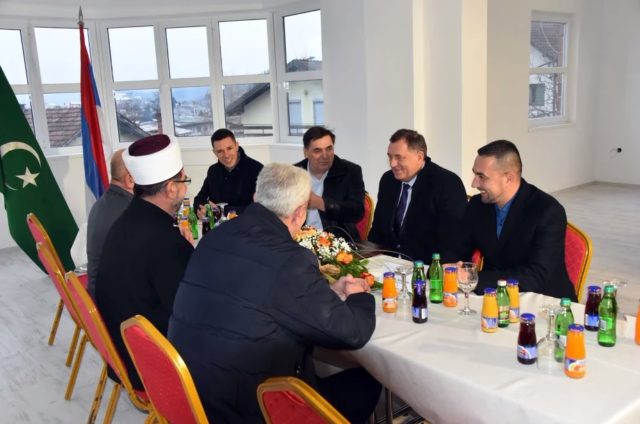 Serb member of the BiH Presidency Milorad Dodik donated BAM 100,000 for the construction of the Islamic Centre in Doboj, stressing that Republika Srpska is committed to peace, stability, freedom and equal rights for all citizens.

“The cooperation of religious communities in Doboj is good and there is no reason to be otherwise. We all need good cooperation and to preserve peace and stability,” Dodik told the press in Doboj yesterday, after visiting the Islamic Centre under construction in that city.

He voiced confidence that the construction of the Islamic Centre would be completed soon.

“I am pleased with the progress in mutual cooperation, because only in this way can we safeguard our lifestyles, peace and stability,” Dodik said.

“I am sure the construction of the centre will be completed soon for the benefit of all residents. This will be an educational centre, and good coexistence, which we will maintain, is a feature of Doboj,” Jerinić said.

Doboj Imam Bajro Džafić thanked Dodik for the funds provided and reminded that the construction of the centre began in 2015.

“I am grateful to Dodik and the Doboj authorities for the help they provide us with. The Islamic Centre will be for the benefit of all residents,” Džafić said.

“I am grateful to Serb member of the BiH Presidency for helping the Islamic Community and I believe that we will build a madrasa in Banjaluka with the help of Srpska officials,” Abdibegović said.

In addition to Dodik and Jerinić, the Islamic Center under construction was also visited by Obren Petrović, the MP in the House of Representatives of the BiH Parliamentary Assemby.