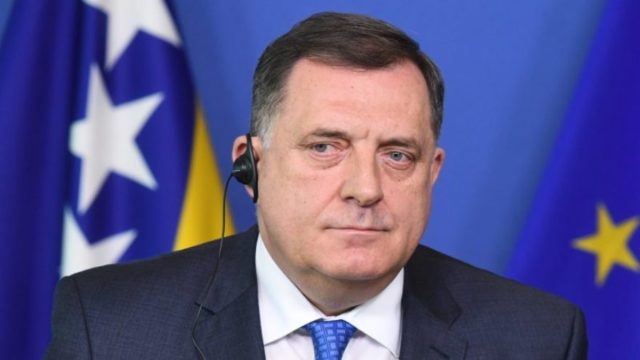 A Serb member of the BiH Presidency Milorad Dodik says the Council of Ministers not being formed in BiH eight months after the elections is the biggest issue, so is the message by Sarajevo politicians who do not accept Serbs as a constituent people, nor their political will expressed in the elections.

“Sarajevo politicians are getting rid of the Serbs from the political system of BiH as they do not respect the will of the Serbs expressed in the elections, and they do not allow Croats the same, who are fighting for their constitutionality,” Dodik, who is also the BiH Presidency chairman, told N1.

He emphasized that the Council of Ministers, which was supposed to be replaced long time ago, was only politically damaging BiH because, as he said, it was an unprecedented practice that one man /Denis Zvizdić/ was the chair of both legislative and executive authorities and that the same ministers were in the Parliament.

“This is another setup in BiH. We agree on one thing, which also applies to BiH’s membership in the EU as a priority, and then something else is done. The candidate status would bring a new dynamics to BiH and I cannot believe that those who are advocating for BiH refuse it,” said Dodik, who is the SNSD leader.

According to Dodik, Croats and Serbs could have formed the executive power at the BiH level in December, but Bosniaks prevented it.

According to him, BiH Presidency members’ visit to Brussels was also futile because the two other members of the Presidency /Željko Komšić and Šefik Džaferović/ acted fraudulently and charlatan-like towards the key EU leaders and the BiH citizens.

He said that the roaming, the certification of higher education institutions and the authorities formation were the preconditions for BiH at the time, and since nothing of the aforementioned was done, Johannes Hahn, Commissioner for European Neighbourhood Policy and Enlargement Negotiations was humiliated as his arrival to BiH “was reasonless”.

Dodik, who is also the SNSD leader, said that the meeting about the formation of the Council of Ministers has not yet been scheduled with SDA leader Bakir Izetbegović, while the talks on this subject are regular with the HDZ leader Dragan Čović.

When it comes to the leader of the Union for a Better Future of BiH, Fahrudin Radončić, Dodik says that Radončić’s practicing of politics and possible contribution to the stabilisation of political situation in BiH is not disputed, but the intent of his media /Dnevni Avaz/ to “demonize” the political opponents is.

Dodik says he does not feel responsible for the political crisis in BiH, saying he regularly checks his political credibility in the elections, as he and the party he heads convincingly win with the highest number of votes.

He reiterated that the reserve police force of Republika Srpska was not directed against anyone but towards the security and stability in Srpska, adding that this force would have legally defined obligations and be engaged if needed and in accordance with the law.

“We in Republika Srpska believe the formation of a reserve police force is necessary because of the migrants, the people returning to BiH from the Islamic State, some regional criminal groups present in BiH and trafficking in narcotic drugs,” Dodik said.
He stressed the need to strengthen the status of a police officer, emphasizing that the state must not allow the policemen being inadequately armed, as happened during the terrorist attack in Zvornik, which killed one police officer.