Home Politics Dodik: There won’t be another war in Bosnia. I care about peace,... 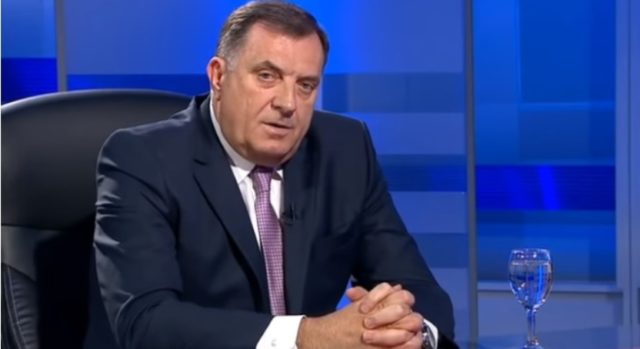 Bosnia cannot be a functional and prosperous country because Bosniaks want to be the dominant people in it, Bosnia’s Presidency Chairman Milorad Dodik said on Wednesday.

“They’re already trying to dominate the Croats in the Federation of Bosnia and Herzegovina entity, and they’d like to do the same with Serbs at the State level by promoting a civic state in a country whose constitution says it consists of two entities and three peoples,” Dodik told the Republika Srpska entity TV (RTRS).

He noted that people are living in some kind of virtual life which implies a civic state which is absent in the political system and the system of government of Bosnia and Herzegovina.

Dodik argues that Serbs are entirely humiliated and devastated in the Federation of Bosnia and Herzegovina (FBiH) entity.

Bosnia consists of two semi-autonomous entities – the Bosniak-Croat shared FBiH and the Serb-dominated Republika Srpska. The Constitution also says that it consists of three constituent peoples, Bosniaks, Serbs and Croats as well as ‘Others.’

The Presidency Chairman touched the 2009 Sejdic-Finci verdict when the Roma representative Dervo Sejdic and former Head of the Jewish Community, Jakob Finci, sued Bosnia for its discriminatory Constitution barring them – as they are neither Bosniaks, Croats or Serbs – from running for Presidency. The European Court of Human Rights in Strasbourg ruled in favour of Sejdic and Finci, saying the state is discriminating against them as a Roma and a Jew.

“The verdict was never implemented because the FBiH has a problem with that. The RS, on the other hand, has a consensus on this. We continued electing our Presidency member in a direct presidential election,” Dodik said. “We’re ready to say the RS is not voting for the Serb Presidency member, but one of the Presidency members so that we could adapt to that farce.”

Dodik also noted that he is fighting for the RS and Serb interests in the State Presidency, adding that he never hurt a single Bosniak and Croat since he has been in office.

“There won’t be another war in Bosnia. I care about peace, progress and tolerance. I don’t want to prevent any beneficial projects, and that’s how I act in office,” he concluded.