Ljubačevo is not a densely populated village, and the houses are not divided by streets like in the plains. The houses are often far from one another, but the people are close.

The main materials and sources of life for the people in Ljubačevo were mostly wood and stone. To produce a bite of soft bread from a hard wood and an even harder rock was always considered a great skill here.

Nature was not always kind to the people of Ljubačevo. Drought years used to burn crops, there was no water and the people and the cattle were thirsty, the wind called Dry Grad burned the leaves on the trees. Despite all that, the cruel their life was, the kinder, more gentle and noble the people were.

Above our Ljubačevo, like a patroness and a guardian mother, the Osmača Mountain stands. Whoever heard its hum and whisper as a child, he kept it in his heart and soul even if he was hundreds and thousands of miles away, wishing and dreaming of returning in the arms of the old mountain to, just hear once more that gentle hum and the comforting whisper of the mother mountain, where one was born and raised.

Ljubačevo is a place rich with valleys. It is as if Nature and Fate wanted to award these people with little oasis, where they could, in hard times and drought summers, sow a little something for hard autumns and winters, and by the spring, among snowdrops, primroses and violets, pick fresh nettle and greens, to survive untill the next summer and the next happy times. 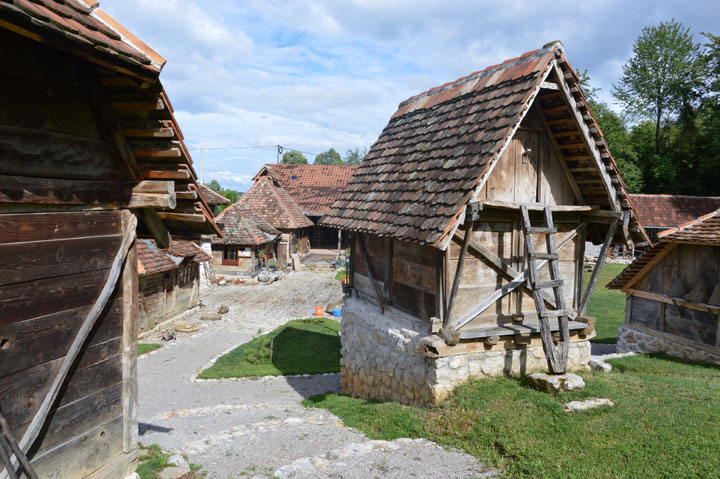 Ethno Village – Museum Ljubačke doline sits on 2 hectares of land in Ljubačevo village, at about 17 kilometres from Banja Luka.

Ljubačke doline (valleys) got their name after the valleys surrounding the Ljubačevo village. Ljubačke doline are a natural phenomenon, unique in all of Europe. They are natural dents in the ground, several hundred meters deep and wide. These valleys spread over the entire Ljubačko polje (field) and, as such, cannot be found anywhere else in Europe.

They are even mentioned in some Western European travel guidebooks as a remarkable natural phenomenon and genuine tourist attraction.

The canyon of the Vrbas River, Tijesno, is one of the largest and most beautiful canyons in Europe. And the best view of the canyon is from the Ljubačevo village.

A cave with very rich ornaments and rare species of bats was discovered in Ljubačevo.

In the village you there is a church built in 1939, there are tombstones from 16th century, the remains of a Turkish inn known as the Čardak, built 18th century, the Glamačko Lake…

Ljubačevo is rich with flora and fauna; it is a genuine ecological oasis for lovers of nature, herbalists, artists, sportsmen, hunters…

The idea for this Ethno Village was born out of Nedeljko Branković’s love for old ways of living, antiques, culture and tradition.

Ethno village Ljubačke doline is designed and set as an open-air museum with the intention of showing the life of a community that used to inhabit this area, its traditional architecture, material culture, and furniture from the late 19th century and early 20th century.

The Ethno village is intended to host exhibitions, art colonies, and historical re-enactments; to collect, preserve and present material and non-material cultural heritage from this and other regions.

The Ethno village consist of houses, barns, a pantry, vajats (houses for sleeping), a corn storage facility, a stable, a shepherd’s cottage, a tool shed and an agricultural machinery garage, an apiary, a distillery, etc. In total, some 40 different buildings.

On the other side of the Ethno Village, you can find reconstructed blacksmith, carpenter and cooper shops among others, as well as a general store. All shops are furnished with authentic tools and machines from 19th and early 20th century.

The central object in the Ethno village is the market, also used as a space for exhibitions. In the centre of the market, you can find a tavern, but also an antique shop, a tailor, a weaver, a barber, a pharmacist/herbalist, etc. The difference between this and many other similar ethno villages is that the owner Nedeljko Branković aims to transform the Ethno Village into a fully operational arts and crafts community center.