Home Interview Igor Lazarević: Med student by day, artist by night, and so much... 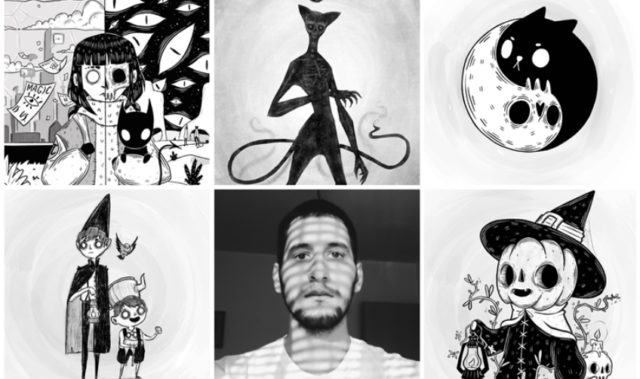 Igor Lazarević, a med student, who was able to read all the books of The Game of Thrones, while he was preparing exam in histology, he is up to date with all the new films that have appeared, a successful illustrator, also publishing two books … and he still have time to chase his dreams.
You might think that’s all … read a lot more below.

TST: At one point in your life, you have extinguished all profiles on social networks, soon after profile Behemot was born on Instagram, and the rest becomes history … tell us more about these initial events that created Behemot at the end?

LAZAREVIĆ: Few years ago I was stuck in a really weird life period, and I needed some change. I felt the need to create and to express my neglected creativity which was dormant for many years. I took a break from school, shut down personal social media accounts, ignored emails, took a pencil and some printer paper and drew. And it felt good. My Instagram profile was created at the very beginning in order to keep track of my growth as an Illustrator. I spent more time feeding that creativity with books, comics, cartoons, and every day drawing felt more and more natural. Once I started, I couldn’t be stopped, and I drew obsessively as if I was trying to compensate for all those lost years in which I didn’t create.

TST: I know that everyone is asking you this, but can you explain to our readers why exactly name Behemot and why such fascination with the cat’s character from the Master and Margaret?

LAZAREVIĆ: The Master and Margarita, together with Alice in Wonderland, is my favourite book of all time. I fell in love with it in secondary school and every now and then I’ll get back to reading it again. The story keeps fascinating me over and over again, and what I like the most about it is the way it talks about magic. In the book, magic is described as the truth, rather than smokes and mirrors, and the magical characters are the one who are most genuine and real. Compared to them, reality seems vague and fake, like a reflection on a dirty puddle. One of those characters is Behemot (or Behemoth), a giant, demonic black cat, who walks on two legs, loves vodka and speaks fluent sarcasm. Needles to say I relate to that description on a personal level haha.

TST: Tim Burton had a great influence on your style, which we can call creepy and cute, who also had an impact on your development as an artist and do you have in plan to try out some other styles, like anime that you love so much?

LAZAREVIĆ: Tim Burton was a big inspiration in the beginning. Later, as I drew more and more, I naturally moved away from his influence as my own style started to form. Besides him, there are many others who have, in one way or another, influenced me and my creative process. One of them is Edward Gorey, the author who would often play with themes of children and horror, with creepy and dark portrayal of kids contrasted with elements of macabre. I was also influenced by many comic books and comic book styles, primarily when it comes to visual storytelling and character designs. Also, a huge role in forming my style play many modern cartoon shows such as Over The Garden Wall, Gravity Falls, Adventure Time etc. Anime also had a big influence on me, but drawing in anime style was never my cup of tea. I feel like many young artist use anime and manga as a crutch on their way to finding their own style, and are bound to abandon it once they grow. Not many western artists make a career out of drawing in this very specific style. The more you draw, the less likely you are to utilise any other style but your own, especially when it comes to illustration. TST: You are currently working on your first book, could you tell us more about it?

LAZAREVIĆ: I work on two personal projects at the moment, the book and the comic. The book is a collection of characters and drawings I created centred around Halloween. It’s about a small town inhabited by anthropomorphic pumpkins who evolved into sentient beings after the nuclear apocalypse that destroyed humanity. They rebuild the society and centered it around Halloween, their most sacred holiday. The book will collect illustrations and stories about Pumpkin town, and it will be in a style of a children’s book but for adults. It’s creepy, gory, satirical, weird, but also very cute and endearing. The “Dead Girl” comic book is a project I plan on working with few other artists. I am doing the character design and I write the script for it, others will draw panels. The story is about the girl who died and ended up in a weird, seemingly deserted realm called Purgatory. Throughout many adventures she’ll make new friends, learn more about this new dimension, its inhabitants, lore and magic. TST: Not much of your followers know that you love also a written word. You wrote for famous bh.portals, how you manage to accomplish all this?

LAZAREVIĆ: Yes, I also love to write, and I try to give my drawings story anytime I can. Probably that’s why I love visual storytelling and comic books. Before I took a leap into my own creativity, I wrote articles for couple of local web magazines, primarily for Helly Cherry and Kultur!Kokoška. I wanted to write about things I personally liked to read, but couldn’t find much about it in local media, and I was lucky enough to find these two who welcomed me with opened arms. Unfortunately, the more I worked on personal projects and my social media engagement, the less time I had to write articles so I stopped at the moment. I still have plenty of started article drafts and ideas, and I know I’ll always have a place to publish them once they are finished.

TST: You have 204K Instagram followers. How much Instagram, as a social network, actually contribute to your success as Ilustrator?

LAZAREVIĆ: Instagram was and is the main platform I operate on, and it’s easy to say I would probably not be here where I am today without it. It’s perfect for any visual art, more so than any other social media outlet. You can engage with the community and the eyes of the millions are only few hashtags away. Thanks to social media, artists have more freedom than ever, and we are able to freely show our work and make a living out of it. But it’s a double edged sword. Since we are not limited by borders and geography, everyone is competing for the same place in the spotlight, and in the vast ocean of people only few surface out. It’s very hard to break through, because chances are there’s someone out there who already does it better than you. That’s why it helps when you bring something new to the table. Originality and uniqueness is the best way to make it as an artist on social media.

TST: You are trying to be close with your followers and constantly give them interesting content on Instagram, do you sometimes get bored or enjoy it?

LAZAREVIĆ: I always say that it’s a full time job haha. It’s even more diﬃcult than a “regular job” in a sense that you erase the line between job and personal life, and everything gets mashed together. I enjoy the community and I try to engage with my followers as much as possible. Sometimes it can get overwhelming, and that’s when I take a break and distance myself from everything. With all the fuss and thousands of likes, comments and messages the pressure to keep everything in line can be too much to handle sometimes. That’s when I take a step back, recalibrate and remind myself that this is primarily for me, my art and me having fun. If I’m not having fun, I’m doing something wrong. TST: When are you planning to finish college?

TST: What do you want to become when you grow up, a doctor or an artist?

LAZAREVIĆ: Both. I think there is place in my life for both medicine and art, and since I’m a pathological perfectionist, I will make sure to learn and balance the two. I have too, because I can’t and won’t choose only one.