Home Social Ilija Đurić, the Only Professional Coffee Taster in the Region 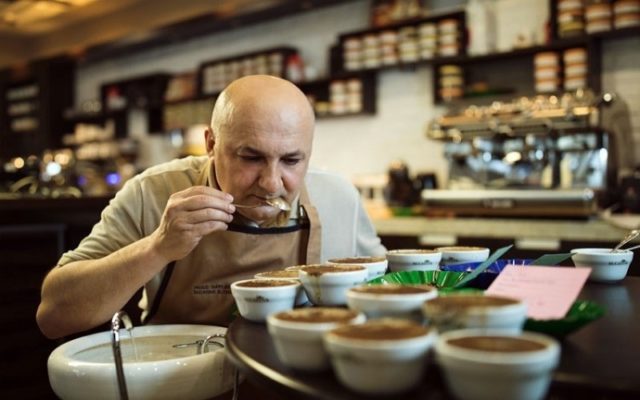 An expert in the quality coffee evaluation and an international taster, the only one in Southeastern Europe is Ilija Đurić. He works and live in Belgrade, but often comes to his hometown, Lopare.

Ilija Đurić is the only expert in the evaluation of the quality of raw coffee and a drip coffee taster in the former Yugoslavia.

Quite by accident, he got into this story, now more than 20 years ago.

– Working with those bags, at one point I smelled a strange smell of coffee and said it would not be good. It turned out the next day that it really wasn’t good and then the former owner suggested that my taste be educated – says Đurić.

Afterward, he was first trained in Greece and then in the Netherlands, but he learned the most in Brazil, the largest coffee producer in the world.

– I saw there in fact how the coffee tastes, how the samples are prepared and selected. That was the first time, and then I researched one origin every year. Brazil is the largest producer of arabica, 50 million bags a year – says Đurić.

The process from picking to the end-user is extremely complicated and the most important thing is picking and baking.

– The Millard reaction, when an event occurs where hundreds of flavors go away forever and some come, is a great skill. The experience of the master at that point should interrupt that roasting – explains the famous taster.

The quality of the coffee does not depend on the classification, so it may be that the fifth class is better than the first.

– The eighth grade in Africa is ruggedly dried on the ground, thus picking up some of the pebbles. When these points are added up, it’s eighth grade, but that doesn’t diminish its taste – adds Đurić.

Ilija assures us that we drink very good quality coffee in our region, but that we are far from developed countries when it comes to how we drink it.