Home Sports On this day 28 years ago, Red Star was the champion of...

On this day 28 years ago, Red Star players beat the French Olympic from Marseille in the Champions Cup final in Bari and thus achieved the greatest success of the Serbian and Yugoslav club football.

The 1991 European Cup Final was a football match held at the Stadio San Nicola in Bari, Italy, on 29 May 1991, that saw Red Star Belgrade of Yugoslavia defeat Marseille of France in a penalty shoot-out. After normal time and extra time could not separate the two sides, the match was to be decided on penalty kicks. Manuel Amoros’s miss for the French side proved crucial, as Red Star held their nerve to win their first European Cup.

Red Star arrived in Italy unusually early, on Thursday, 23 May 1991, six full days ahead of the final. The team set up base in the town of Monopoli, 40 kilometres south-east of Bari. There they stayed in Il Melograno Hotel and trained at the facilities of A.C. Monopoli. Due to a lot of interest from richer European clubs already being raised for the future services of young Red Star players, the club management tried to ensure its footballers were fully focused on the task at hand. The players were placed in semi-quarantine immediately upon arrival in Italy, which meant being separated from wives and girlfriends without the ability to receive incoming phone calls in hotel rooms, though able to make outgoing calls.

Their triumph is immortal and remains one of the greatest achievements in the history of Eastern European football. 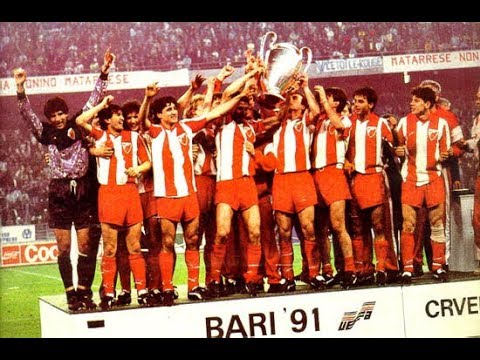