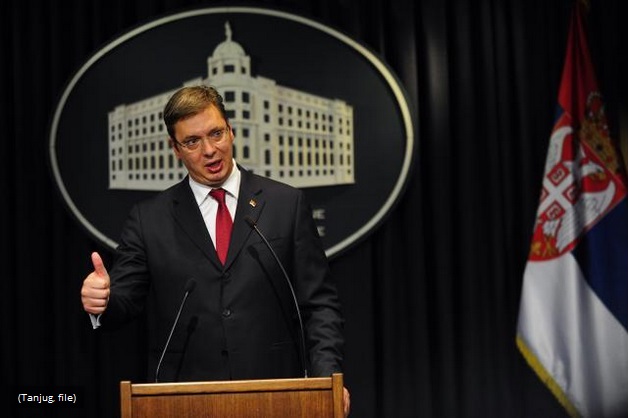 Aleksandar Vucic said on Thursday he had known two years about the controversial recordings of meetings between top police officials and Rodoljub Radulovic.

“I know also about many other recordings. I absolutely knew. I am also responsible,” the prime minister told the state television RTS.

He added that he met on Thursday with Foreign Minister Ivica Dacic – one of those featured in the videos of meetings that took place in 2008 and 2009 with Radulovic, now a fugitive from justice – and spoke with him, but that he would “rather not talk about it, because honorable people do not discuss conversations they had in private.”

According to Vucic, Dacic is not right when he says that “people from the DS were not his friends.”

“Were were not legally able to tell him not see that person, and the other. All this became interesting after the seizure of two tons of cocaine, when the action against (Darko) Saric was launched.”

According to him when the videos were published on Monday – the day he was meeting with German Chancellor Angela Merkel – “it was in someone’s interest for that to be pushed to the background.”

“I have no faith at all in the CINS and BIRN. This (recordings) is largely true. However, at one time they invented affairs involving Western Tamnava and Kolubara. It wasn’t enough that the World Bank said that everything was fine, except that a man lost money in the tender,” Vucic said.

The data is accurate, he said, in reference to the videos published now, adding that “this is something that we knew.”

“I have certainly known it for two years, and I know about many other recordings. I absolutely I knew and I am also responsible,” he stressed.

“When the investigation was launched, Mr. Radulovic began to call everyone from the political life,” continued the prime minister.

“A large number of them were from the SPS, but there were there some from other parties that were not irrelevant then, but I can’t (talk) about it. So, this was discovered in 2013 and then the state entered a pre-election process. These are the papers of the MUP that Dojcinovic has. That year, the prosecution looked at connections of both Dacic and Vukic and Lazarevic, as well as several police officers, and it all went to preliminary investigative procedure,” added Vucic.

After that, according him, the prosecutor proposed indicting four persons – Radulovic, Branko Lazarevic, as well as two police officers, “Gara and Strbac.”

“There was no evidence to indict Dacic. In the criminal-legal sense, that put an end to it. There is no criminal liability,” the prime minister said.

He then said he considers Dacic “neither lazy nor stupid,” and a man “who can be useful for Serbia.”

“I waited after the election to see whether there will be an indictment against him, and there wasn’t one. This is not an easy topic for us, there’s my responsibility for choosing Mr. Dacic and I am ready to bear it,” he said, adding that his government “enjoyed full unity and did a good job.”

After that, the SNS leader said it was “his choice to go with those he knows stole money for handicapped children” and added he had no regrets and did a good thing for Serbia.

“What I said to Dacic and what he said to me remains between us,” said Vucic.

When asked to comment on a statement by Nebojsa Krstic that Dacic is “guided more by party than state policy and so asked to get his knuckles rapped,” Vucic said, “Ivica likes party politics, but he has conducted a fair state policy”.

Asked “how it was possible that the footage was made public,” Vucic said it leaked from the Interior Ministry (MUP), not the security agencies.

“It’s bad, but it has happened before and it happens also in developed countries where institutions are much more powerful,” said Vucic.

Asked “whether there are 120 discs with compromising materials,” Vucic said that the Interior Ministry wiretaps “only 640 people out of 7.5 million citizens of Serbia” and that “people usually talk nonsense because they do not feel important unless someone is wiretapping them.”

He also said that he “never showed any discs to anyone, and that includes sociologist Jovo Bakic.”

Asked to comment President Tomislav Nikolic’s statement in support of Dacic, Vucic said he assumed that Nikolic wanted to say he did not wish to take part in “personal hunts.”