Shards struck her in the bathroom, while she was sitting on a potty Shards of NATO bomb tore up the window, the curtains… Milica was sitting on the potty. The mother Dusica went to make her bed just before that.

Dad Zarko picked up the laundry and a little red dress with a kitten in the basket which was sleeping. Brother Aleksa counted his toys and he placed her doll into the bed, near the pillow. That is how Milica used to go to bed.

The explosion was strong and loud, and there was no sound after it. Besides the cries of dad Zarko. He took Milica into his arms. He was running down the stairs, but his child was losing the battle in his arms. He got into the car and he drove… and drove… he couldn’t settle with the fact that his beautiful little flower was taken out of the beautiful parent’s garden. She passed away, without words, in the arms where she dreamt and slept the best. 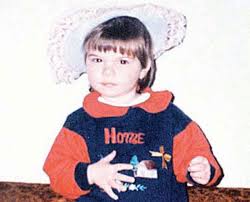 And just a few hours ago, she was drawing flowers, but she became the target of the largest military alliance on that spring day. Two decades ago, the airplanes came down on Yugoslavia. Rakic family was silent. Their friends were silent, and the family on both sides of the Drina river. The entire country was silent at one moment, in disbelief that Milica is just “collateral damage”. She wasn’t the first, nor the last. She was one victim in a long line of the bombing which took 78 days. Dusica and Zarko, after this tragedy, restored their family. They got a girl Andjela. But they were mostly silent. In silence, they endured the pain over the crime without the sentence.

The placed a notebook on the white coffin where Milica drew hew flowers. They lowered the crayons. And the doll she loved. Everybody believed that Angels are playing in the heavens. And up there, they finish their drawings which they began on Earth.