Home Balkan Premiere of “The Diary of Diana Budisavljevic” brought tears and delight to...

“I was hoping that emotions would flow from the screen to the audience in Belgrade and I was happy that it happened”, director Dana Budisavljevic said to Tanjug. 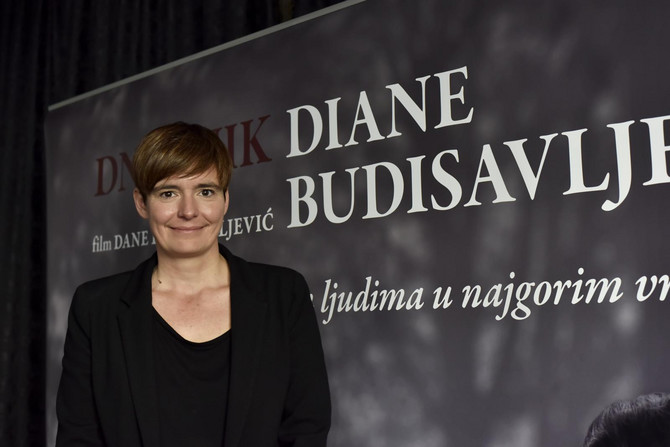 The true story of an Austrian married to Serbian doctor in Zagreb who rescued more than 10,000 Serb children from Ustasha camps during World War II, finally reached the audience in Serbia after this year’s premiere in Pula.

Silence, tears and heavy sighs were the most common reaction of the audience at the Kombank hall during the screening of the chamber drama with documentary elements.

Authentic scenes filmed in the camp for Ustasha propaganda during World War II, which were ceded by the Yugoslav cinema for the realization of the film, left the audience breathless, because, among other things, they saw children up to the age of seven lying half dead in a so-called Jasenovac hospital.

The silence in the auditorium over the course of the film was broken off by a long round of applause after the second of the three sold out screenings, which is a confirmation that there is a lot of interest in the Dana Budisavljevic’s film “The Diary of Diana B”, which is its official English title.

“I am pleased to see people here who want a different kind of message and a different kind of film. Our film shows that life, good and humanity defeat the greatest evil and that is why it is very important for us that this film is seen by as many people as possible”, Budisavljevic said, adding that, after the screenings in Belgrade, people thank her on her courage, determination and, above all, for making a good film.

“I have met people who were very shaken. I was hoping that emotions would flow from the screen to the audience in Belgrade, as it happened at the Pula premiere, and I am happy that it happened”, Dana Budisavljevic said after the premiere.

She notes that the film is regularly distributed in Croatian cinemas and that a large number of teachers from Croatian schools take their students to the organized screenings of “The Diary of Diana Budisavljevic”.

“There is a possibility that the film will be officially shown in schools across Croatia”, Budisavljevic said.

One of the surviving inmates and witnesses to the suffering of Serbian children in Ustasha camps, Zivko Zelenbrz, also arrived at the Belgrade premiere of the movie by Dana Budisavljevic.

He told Tanjug that he was very young when he arrived at the Jasenovac camp and that he did not remember how he lost his parents.

“Unlike many children who survived Jasenovac, I do not remember the exact moment when I was ripped off from my mother’s hands. I remember a woman who, after I was rescued from the camp, became my new mom. After a while, a letter arrived from a German camp from a woman who claimed to be my real mom. Then, I squeezed the woman I lived with because I couldn’t stand losing someone who cares for me again”, Zelenbrz said.

One of the most eagerly awaited films of the year – the Croatian-Slovenian-Serbian co-production “The Diary of Diana B”, will be screened in cinemas and cultural centers all over Serbia.