Republika Srpska President Milorad Dodik has welcomed Russian Foreign Minister Sergey Lavrov today in front of the foundations of a Serbian-Russian church and a spiritual and cultural center. 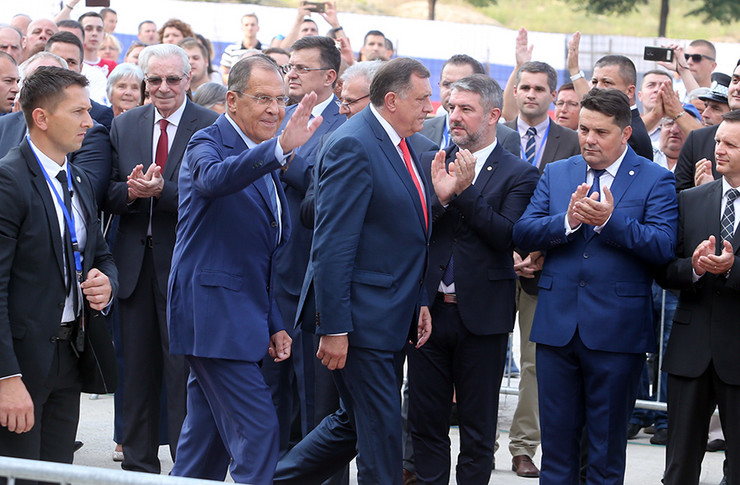 Lavrov was also welcomed by His Eminence the Bishop of Banjaluka, Jefrem, the Speaker of the Republika Srpska Parliament, Nedeljko Cubrilovic, members of Parliament, Prime Minister Zeljka Cvijanovic, Cabinet ministers, Serbian Foreign Minister Ivica Dacic, the Consul-General of Serbia in Banjaluka, Vladimir Nikolic, the Head of the Republika Srpska Representative Office in Russia, Dusko Perovic and representatives of the Banjaluka City Administration.

A great number of citizens, whom the Republika Srpska president invited to welcome the Russian foreign minister, gathered at a plateau near the foundations of the Serbian–Russian church and the spiritual and cultural center.

His Eminence the Bishop of Banjaluka Jefrem, the Vicar of the Moscow Patriarch the Archbishop of Yegorov, Matthew, the Bishop of Srem, Vasilije, and the retired Bishop of Zvornik and Tuzla, Vasilije, consecrated the foundations of the Serbian-Russian church and the spiritual and cultural center on Monday, September 17.

Earlier today, a delegation of the Republika Srpska Government, headed by Prime Minister Zeljka Cvijanovic, welcomed Lavrov at Mahovljani Airport. The Russian foreign minister was welcomed in keeping with the ancient Serbian custom, with bread and salt.

A great number of domestic and foreign media outlets are covering Lavrov’s visit to Banjaluka.

Earlier today Lavrov met in Sarajevo with the members of the BiH Presidency and BiH Foreign Minister Igor Crnadak.

Russian Foreign Minister Sergey Lavrov expressed gratitude to the Republika Srpska leadership, primarily to President Milorad Dodik, for the implementation of the project of construction of a Russian-Serbian church and a spiritual and cultural center in Banjaluka.
Lavrov said today in Banjaluka that this church will play a great part in the future cooperation between the Russian Federation and Republika Srpska.

The Russian foreign minister thanked the Russian and Serbian Orthodox Church, the leadership of the Nizhenovgorad District, the Imperial Orthodox Palestinian Society, the Architectural Institute, and many others.

“We know that the Serbian people preserve the memory of the last Russian emperor, who supported Serbs at the moment when they faced a very dangerous and powerful enemy,” Lavrov has said.

He has said that during the difficult years of the Great War, Russians and Serbs were brothers in arms.

Lavrov has said that many Serbs who lived in the territory of occupied Bosnia and Herzegovina were forcibly recruited to the Austro-Hungarian Army, who then voluntarily joined the Russians, joined a voluntary Slavic society for liberation and fought against the enemy.

According to him, it is not an accident that WWI veterans launched the initiative for the building of a church in memory of the last Russian Emperor Nikolai II Romanov.

“In the past 100 years, our peoples faced many challenges, but they did not suppress deep respect towards our joint history. They did not erase from memory unselfishness, heroism, love for one’s homeland of our forefathers,” Lavrov has said.

He has stressed that today’s ceremony is a great contribution to the strengthening of spiritual and cultural ties and unity, which connect the Russian and Serbian peoples, and sincere friendship and love of one for another.

“I would like particularly to welcome and express my warmest feelings for all residents of Republika Srpska and Banjaluka who today came to this event,” Lavrov has said.

Lavrov, together with Republika Srpska President Milorad Dodik and the Bishop of Banjaluka, Jefrem, unveiled a plaque which will be put on the wall of the Russian-Serbian church once it is completed.

The following words are inscribed on the plaque: “Sincere friendship and brotherly love between the Serbian and Russian peoples are incorporated in this magnificent church dedicated to the Holy Imperial Romanov Family. Republika Srpska President Milorad Dodik and Russian Foreign Minister Sergey Lavrov.

Republika Srpska President Milorad Dodik has said that the Russian-Serbian church in Banjaluka connects time and centuries and that its construction will improve friendship between the peoples in Russia and Srpska.
“We will leave the church to next generations. People who are coming from Russia will have their home and a proof of our great friendship,” Dodik has said after he and Russian Foreign Minister Sergey Lavrov toured the foundations of the Russian-Serbian church.

Dodik has said that Srpska is stable, peaceful and dedicated to development, and that the presence of successful Russian companies means a lot to it.

“All this is a proof of our good cooperation. I would like to thank president /of the Russian Federation Vladimir/ Putin for his attention,” Dodik has said.

He has stressed that Russia is committed to peace, respect for international law and the Dayton Agreement and that this is something that brings us together even more.