This monastery is today the spiritual center for some 30,000 Serbs living in this part of Kosovo and Metohija.

For six and a half centuries, the Serbian Orthodox Monastery of Draganac in Kosovo and Metohija, the endowment of Serbian Prince Lazar, testifies about the love of a parent and the enduring pain over the loss of a child – but also about the lives of Serbs in the Kosovo Pomoravlje District and in the area of ​​Novo Brdo.

Eight years before the Battle of Kosovo, namely in 1381, Draganac was first mentioned in Prince Lazar’s Ravanica Charter. The exact year of the church’s construction is unknown, but what is known is that Serbian Prince Lazar built this shrine in memory of his prematurely deceased daughter Dragana, who was only 16 when she passed away.

This monastery is today the spiritual pillar for some 30,000 Serbs living in this part of Kosovo and Metohija, a place of assembly and solace for all whose souls seek the living Orthodox Orthodox faith as a path towards salvation. 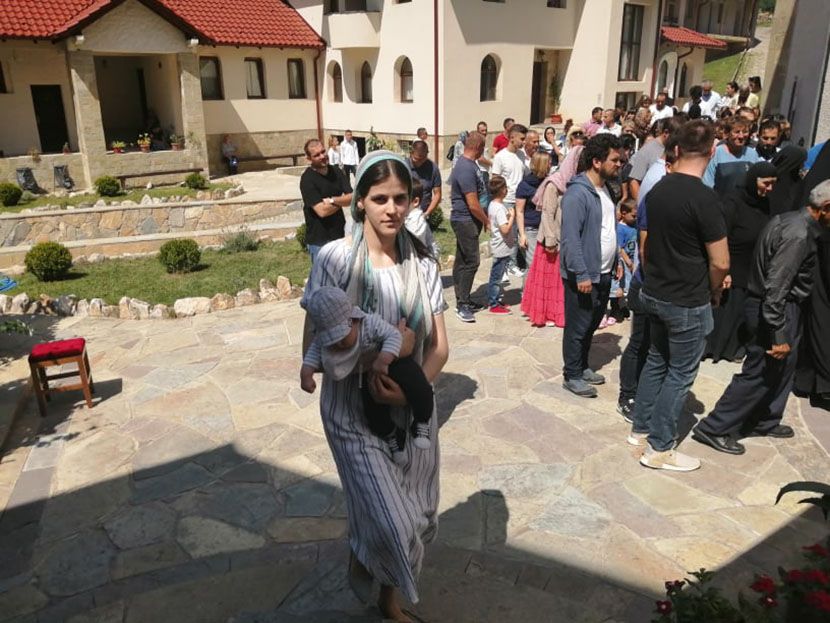 Kosovo is for the most part flat, a place where it’s rare to come across real shade, especially in the Gjilan region. It is an area of ​​grain fields from which wheat has recently been harvested. But when you start from there towards Novo Brdo, a few kilometers on the right, along a gentle hill, the path leads toward Draganac, a place that will give you the kind of love, safety and comfort that only a parent can give.

The road that leads to Draganac goes through an oak forest, through which you can see nothing but a piece of the sky and the clouds in it.

A real refreshment after the Gjilane plain and the temperature on the hottest day of the year, which is called Goresnjak around here – a popular name for the holiday dedicated to the Holy Archangel Gabriel. After two kilometers, you arrive at the court of the church and the konak (lodges) in it, tucked in between the hills.

A safe haven, which exudes love, peace and invites all who long for it, to “flee” to the court of this shrine.

Liturgy (Orthodox mass) served on the occssion of the monastery’s slava gathers not only Serbs from this area, but also from all over Kosovo and Metohija, from other parts of Serbia, along with monks, American soldiers serving in KFOR, and guests from abroad. Czech, Slovenian, English and Russian are heard spoken by the people who gathered there.

The head of the monastery and of the monastic fraternity of about ten monks and novices is Father Iarion, a former actor whose worldly name is Rastko Lupulovic.

At the age of 22, he received one of the most prestigious Serbian theater accolades, Sterija’s Award for his role in the play “Below Decks” – and he later received the Zoran Radmilovic Award. He played Milance in the TV series “Open Doors and is known for his role of Boban in the film “It Will Get Better” and as Darko Popovic in “Package Arrangement.” Rastko also played the guitar in the rock band Kanda, Kodza and Nebojsa.

In his sermon after the liturgy, one of the priests here reiterated the words of Bishop Teodosije, who said this shrine had never shone in such glory in all its history, and that there were never so many monks and the faithful to gather in the name of God, coming to the Assembly of the Holy Archangel Gabriel also on Easter Friday.

Christianity teaches us to be good people, to be good neighbors, but besides, it teaches us that it is only a way and signpost to the Kingdom of Heaven. 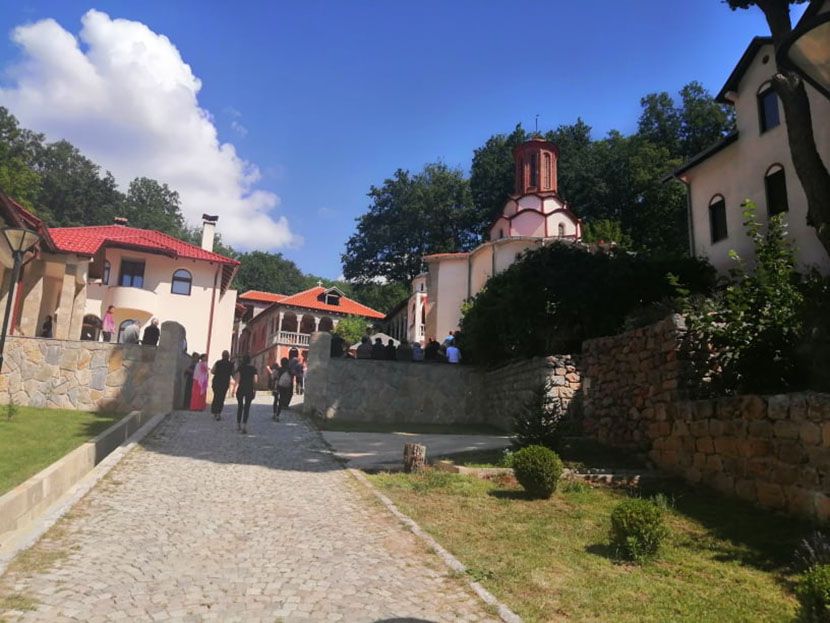 “The name of God has been continually celebrated in this shrine for several centuries, and it calls to us even though we have at some point moved away from this holy place of God. Together with the heavenly powers we celebrate God – what an honor it is for a man to unite with the celestial powers, and he can be similar only if he fulfills the commandments which the Church requires of him.”

And, above all else, the church requires what our holy Patriarch Pavle was crying out for as he walked through this area, visiting this shrine and repeating, ‘Let’s be people’,” the priest of the Diocese of Raska-Prizren reminds.

A particularly indelible mark has been left on this shrine by Abbot Grigorije, a Russian who resided in this region, always awaiting the resurrection, the victory of Russia and of Orthodoxy. Until the 1960s, only one monk remained in the monastery. This was in fact Father Grigorije, who fled Russia escaping the communist terror to arrive in Kosovo and Metohija. When he retired, the monastery was empty until the 1990s, when through the effort and dedication of the monks of the Decani Monastery, it was revived, tying the Serbs from this region to the idea of remaining and surviving.

Very little is known about Draganac in the period preceding its restoration in 1863 by local Serbs from the area of ​​Gjilane. Not far from there, a few kilometers from the village of Draganac of the same name, lies the medieval Prilepac and the village of Prilepnica, the birthplace of Prince Lazar. 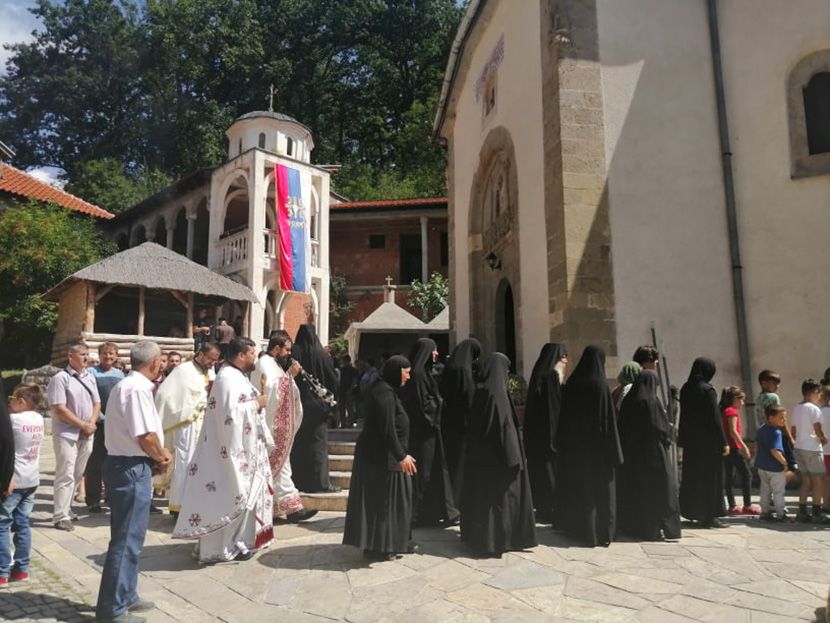 Only ten kilometers north of Draganac is Novo Brdo, once the largest mining center in the Balkans and the economic center of the medieval Serbian Nemanjic state, which at that time had a population of about 45,000 and was a true trading colony.

ALBANIANS, TOO, RESPECT IT

What makes Draganac special is that it is also respected by Albanians, who only have words of praise for its monastic fraternity. The monks here make a famous frankincense according to a special recipe, which somehow smells different from other kind you might have come across, summarizing in itself the finest nuances of pine and floral aromas.

For all the visitors in Draganec, a celebratory slava meal of love was prepared, with fasting food, while Father Ilarion was the real host, talking to each guest, offering the servings along with this year’s feast’s godfather.

The frenshly harvested Kosovo-Morava fields have once again yielded crops for the new sacrifice of the Serbs who live here, as well as to the entire Serb people.

The Pomorava breeze spread the sounds of song and Draganac bells, once again confirming that the monastery, with its entire surroundings, is a place that spreads hope into life, not only in this world, but also in the eternal one.