Abe is visiting Serbia within his tour of six Eastern European countries. His host in Belgrade is Serbian President Aleksandar Vucic.

Vucic, Brnabic and members of the Serbian government officially welcomed Abe in front of the Palace of Serbia.

The official reception was also attended by First Deputy Prime Minister and Minister of Foreign Affairs Ivica Dacic and several ministers of the Serbian government and other officials.

At the meeting of the delegations of Serbia and Japan, Serbian President Aleksandar Vucic said that this visit has a historic significance for improving the relations of the two countries since this is the first visit of a Japanese prime minister in 31 years.

The president stated that even since then the relations of the two peoples have been marked by mutual understanding, respect, and the help of Japan to the people of Serbia.

Abe said that he is extremely pleased that he is on the first visit to Serbia as prime minister, describing Serbia as crucial for the stability of the region.
The Japanese PM said he expects further development of relations in the economic and all other spheres.

Serbia is crucial for stability in the Western Balkans, he told a press conference after the meeting, announcing that his country would actively assist the European integration of Serbia and the region, whose important geopolitical position he underlined.

The Japanese official also said that the international community had been facing North Korea’s threats and provocative acts contrary to international law, and that he had made an agreement with Vucic to work closely in reaction to the problem.

The prime minister noted that Serbia and Japan signed an agreement on Jan. 15 to build a desulphurization unit for the Nikola Tesla power plant, explaining that the project was a symbol of friendship between the two states. Another document signed during the visit was a note on a voluntary overseas cooperation program.

“I hope the meeting will be the beginning of a strong upward trend in the development of political, economic, cultural and all other ties between the two states,” Abe said.

The Japanese guest added that he was only too glad to be visiting Serbia, and that he had had “a meaningful meeting with Vucic, who knows Japan very well.”

Abe said the meeting marked a new beginning for the friendship between the two countries and that Japanese-Serbian relations would be greatly strengthened in political, economic, cultural and other spheres.

Vucic said the visit was historic and a turning point that was crucial for improvement of bilateral relations, adding that he had told Abe he was hoping for improved ties, in particular in the economy.

The discussions were open, constructive and friendly, Vucic said, noting that he had also told Abe Serbia was offering Japanese entrepreneurs the best conditions for investing.

“The emphasis was on the development of economic relations,” Vucic said, describing Serbian-Japanese trade results as rather limited, but added that great opportunities were being opened for making progress in the future.

The Serbian president said he merely repeated the view that Serbia had voiced at the UN General Assembly, that Japan needed to be protected against nuclear threats, confident that all disputes would be addressed in a peaceful manner, and with full respect for the principles of international law.

“We have acquainted Mr. Abe with Serbia’s attitude towards Pristina and the Belgrade-Pristina dialogue, and we have also discussed our relations within different international bodies and institutions,” Vucic said.

President Vucic stated that with the Japanese official he had also discussed the situation in the Western Balkans, and that he supported Serbia’s commitment to regional peace.

Vucic thanked his guest for Japan’s strong support to Serbia’s EU accession, as well as his country’s considerable humanitarian assistance, especially in the wake of the disastrous flood in 2014.

The Serbian president said the visit by the Japanese prime minister was of historic importance for Serbia, as it was the first after 31 years, and that he was confident that a serious boost to bilateral economic ties lay ahead for the two states.

Vucic recalled that the two states had a long tradition of good relations, established in 1882, when the then Serbian king, Milan Obrenovic, opened initial correspondence with the Japanese emperor. 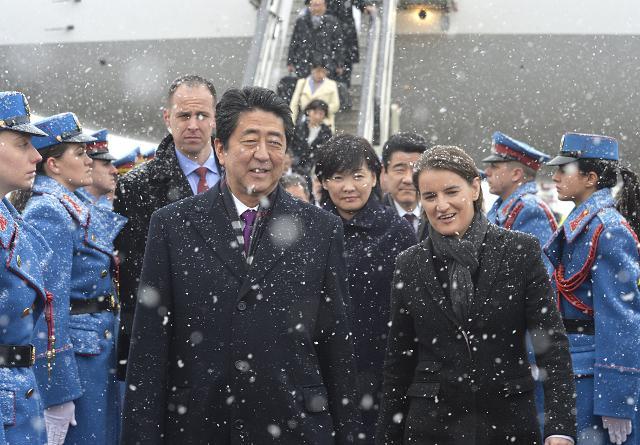 Speaking ahead of the arrival of the head of Japan’s government, Vucic said the visit represented a great honor, and remarked that Serbia was the only non-EU country that Abe will visit during his current tour – and one where he will stay the longest.

Abe arrived on a two-day official visit to Serbia along with a delegation of Japanese businesspeople.

As this is the first visit to Belgrade of a Japanese official at such a high level in over three decades, it has been described as “historic.”

The ceremonial welcome was organized in front of the Palace of Serbia, followed by a plenary meeting of the delegations of Serbia and Japan.

Prime Minister Brnabic attended the ceremony and took part in the plenary meeting.

According to the program of the visit, the delegations will meet with the businesspeople from the two countries, who will be addressed by Serbian President Aleksandar Vucic, Abe, and Brnabic. 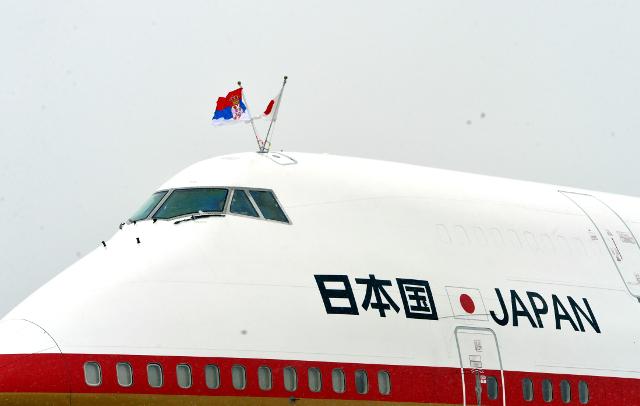 In 2018, Serbia and Japan mark 136 years since they established relations, and although there have been no bilateral visits at the level of heads of state or government over the last three decades, the ties between the two countries are “traditionally good and friendly, while Japan is among the largest donors to our country, in the total value of about 500 million euros,” Tanjug reported.

Japan is a member of the G7, the third-ranked world economic power, and has great influence in international relations. Japan is also a technologically developed country, and many companies, including Panasonic, are already operating in Serbia, the agency said.

Serbia is very interested in Japan’s investments in automotive, chemical, pharmaceutical and IT industries, as well as in the field of agriculture, environmental protection and tourism.