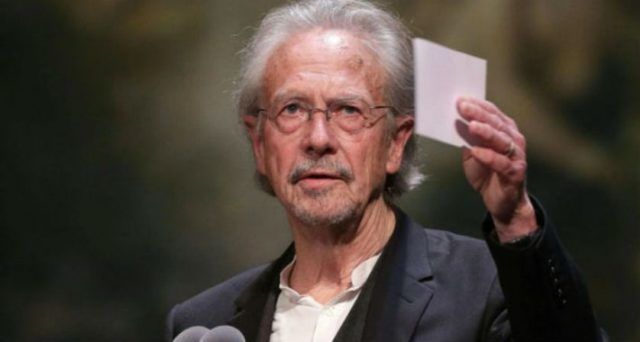 More than 120 Serbian university professors, scholars and writers have sent a letter to the Swedish Royal Academy and the Nobel Committee responding to attacks on Nobel Prize winner Peter Handke in which this Austrian writer delves into the story of genocide in order to demonize Serbs.

One of the signatories, former Foreign Minister of the Federal Republic of Yugoslavia, Živadin Jovanović, told SRNA that the letter stated, that from the moment the Nobel Committee for Literature announced its decision to award the prize to Handke, a political campaign was launched against the literary decision, especially against the non-literary public views of the Austrian writer, in one part of the regional, western and domestic media.

Signatories point out that most regional and western critics of Handke do not refer to his work, but to his public political and national views on the Serbs during the breakup of the Yugoslav state and about Slobodan Milošević, while using means of dealing with writers from totalitarian times – disqualification of the creator because of his public of attitudes.

The signatories point out that any political use of the term genocide in Handke’s case is an insult to millions of victims over the last century in this part of the world.

If we aspire to the truth about social reality, then we have to rely on a scientific, not political, media or judicial assessment, which is determined by the overriding of judges in decision-making. The term genocide means the extermination of all categories of population of a nation. In the 20th century, genocides were reported against Armenians, Jews, Serbs. Second, there were no genocidal acts in the territory of the former Yugoslavia during the 1991-1995 / 1999 war – the letter states.

The letter points out that Handke never spoke of genocide anywhere, and delves into the story of genocide in order to demonize Serbs, despite scientific knowledge and facts and the truth about extremely complex events such as war conflicts and the Breakup of Yugoslavia.

The intellectuals stated, advocating the freedom of thought, that they oppose to the persecution of Handke.