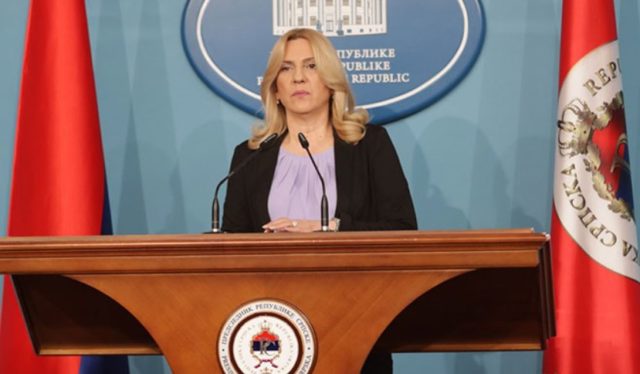 Republika Srpska President Željka Cvijanović stressed that Republika Srpska institutions were the first or among the first in the region to adopt rigorous measures aimed at halting the spread of coronavirus epidemic.

“It has been exactly 18 days since the first case of coronairus was confirmed in Republika Srpska. Since then, until today, we have been recording the growth of patients on daily basis, but it should be kept in mind that the number is certainly higher given the fact that not all citizens are tested, which is impossible, and that the infected may have extremely mild symptoms or have no symptoms at all, thus failing to turn to health care institutions,” Cvijanović said.

Addressing the Republika Srpska public, Cvijanović recalled that in the past days and weeks, Srpska officials had urged citizens to comply with the instructions issued by the competent institutions.

“Concerned about what we have seen in China and then in Italy, our institutions, even before the outbreak of the virus in Republika Srpska, have taken a whole set of preventative measures, knowing that it is impossible to avoid this evil, which is a planetary problem nowadays.

We have closed schools, kindergartens, restaurants, established a new regime of work in collectives, restricted the working hours of shops and introduced new rules for shopping, launched distant learning for our elementary school students through public broadcasting service RTRS, prepared the concept of organising teaching for secondary schools and colleges,” emphasized Cvijanović.

She stated that new measures in form of curfew for all citizens, except for authorized persons, between 20.00 and 5.00 in the morning, were earlier introduced, as well as a general restriction of movement for persons over 65 years of age, as they are population category at risk.

“We have also introduced more rigorous penalties for those who violate the rules of self-isolation at home. One of these measures is the public disclosure of the names of such persons and sending them to organised quarantines secured by the police,” Cvijanović recalled.

She explains that the Republika Srpska institutions have opted for such measure to reduce the number of irresponsible individuals, counting on the fact that noone would replace the isolation in his/her own home by staying in a public quarantine, where instead of with his/her family members, he/she would be staying with complete strangers.

The president of Srpska stated that in addition to the ban on entry for foreigners, special controls on the entry of BiH citizens returning from abroad were introduced at the borders, including the establishment of tent quarantine at the border crossings, as well as special quarantines in all municipalities.

“Special preparations were made within the Republika Srpska health system and we owe the greatest debt of gratitude to our healthcare professionals. Numerous activities have been taken to prepare new facilities for the care of the infected in order to separate them from regular health services.

We also expect further reorganisation within the health sector in order to respond to new needs depending on the development of the situation, as well as to work together with the Republican Emergency Staff and local staffs to identify facilities that could be used for housing and treating the patients”, Cvijanović pointed out.

She stated that at the time when Srpska officials were taking measures to close schools, kindergartens, catering establishments, there were also those who considered the measures excessive or premature.

She stated that the Government of Srpska also initiated the procedure for the procurement of a 500-bed mobile hospital, which would be delivered within ten days, and that coronavirus tests were being continuously procured as well as respirators, which made an issue for far more developed countries.

Cvijanović said that the acquisition of 25,000 additional tests, which should arrive in a couple of days, would enable a more stable health check of the population regarding this virus, thus enabling more adequate measures to be taken.

“Given the number of infected persons in Banjaluka, in addition to our University Clinical Centre, the Banjaluka Health Centre and the City Emergency Staff carry a huge burden, thus we owe them a great deal of gratitude for managing this crisis,” Cvijanović said.

She stressed that Srpska owed special debt of gratitude to Serbia, which promised support related to medical equipment, the admission of severely affected patients, but also to the regular supply of Republika Srpska citizens, as well as to China, which also provided assistance.

Cvijanović stresses that she supports the efforts of the Government, which is already working on preparing measures to support the economy and protect workers so that Srpska will be able to repair damages to the economy as soon as the struggle for health and life ends.

“We cannot yet grasp all the consequences that our employers, workers and the economy will suffer in general, but it is important that we have already started to create certain measures,” the president of Srpska stressed in her address to the public in Srpska.

She stresses her support to the Government’s efforts in preparing support measures to the economy and protection of workers, thus encouraging them to continue discussions with social partners – employers and trade unions in order for Republika Srpska to repair economic damages as soon as the struggle for health and life ends and to protect each worker and his/her workplace through joint measures.

“It is important that, in accordance with the agreements earlier reached, our citizens and our business entities, unable to fulfill their obligations, receive a three-month moratorium on payment of loans. This will mean a huge relief for many families and businesses, but at the same time, we must look for solutions for them not to lose their jobs or businesses,” Cvijanović noted.

She said that the announced establishment of a fund assisting the economy, which would concentrate funds from international and local sources, is of particular importance.

The president of Srpska stated that the Government had also defined certain support measures for agriculture and agricultural producers for spring sowing.

“It is also important for us to create the formal and essential prerequisites for the completion of the school and academic year, including, of course, the knowledge assessment system, but also the conditions for their start in the autumn,” said Cvijanović.

She emphasized the need to acknowledge the educators who entered the challenge of distance teaching via TV, which is a completely new way of learning, but also to the RTRS that made it possible.

“It is important that ways have been found to support the teaching of our high school and university students. After this crisis, we will have to amend certain laws to formalize different ways of distance learning, but also the distance working, and invest more in new technologies and information society,” added Cvijanović.

Although the tackling coronavirus is main priority now, as well as preservation of human lives, the president of Srpska stated that activities were taking place on multiple tracks, including supporting the economy, but also implementing the educational process in new circumstances and in a completely new way.

“But, at this point, the most important thing is to win the virus. We can only do this through the military discipline of all of us. We do not want to see images of Italy in Republika Srpska, in which doctors, paramedics and nurses are crying desperately before the horror they are facing, powerless to stop mass death.

We must assist our healthcare professionals with our responsible behavior so that they can help us all. We must prevent the massive pressures of too many infected people with severe symptoms on the health system. That is why we say that our life must completely change in the next few weeks or months,” Cvijanović said.

Stating that she knows that it is not easy to keep children at home, without school, kindergarten, socializing and playing with peers, without going to grandparents, nor is it simple that the contact with parents and elderly family members, friends, neighbors must be completely interrupted or minimized, the president of Srpska emphasizes that this is the only way to protect them, which is why everyone has to act in this way for the next weeks, possibly for several months.

“This is a difficult period, but I believe that if we are all disciplined, we will declare a victory together with our healthcare professionals,” the president of Republika Srpska said in her public address. /end/vos