The documentary “Tesla Nation”, the latest achievement by award-winning director Zeljko Mirkovic, was recently accepted as an official contender for the 2020 feature-length documentary Oscar.

The film also premiered in Washington. 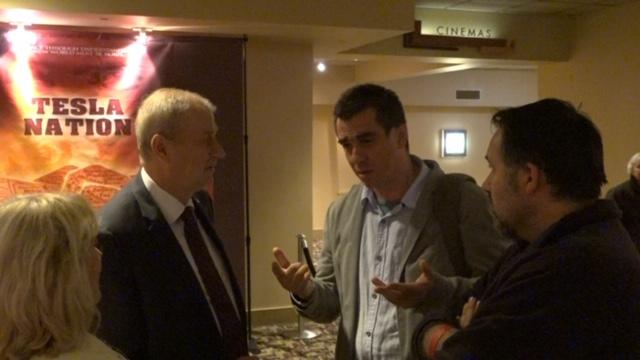 ”Tesla Nation” is a story about the history of Serbian immigrants in America – starting with the first among them, George Fisher (Đorđe Šagić), and later the two prominet ones, Nikola Tesla and Mihajlo Pupin – to those who are leaving their mark in the USA and in the world, nowdays.

Zeljko Mirkovic says that he wanted this story, although it’s about one nation, to be applicable to any other nation, thanks to its idea of ​​creating some new values ​​of individuals, based on achievements and life in a better world.

The role of Nikola Tesla was interpreted by Jack Dimich, who told to the ”Voice of America” that this was his favorite role, because of his origins and connection with Tesla. As he said, by playing “one of the most eminent personalities since our civilization has existed”, he learned a lot:

“Nikola Tesla was especially concerned with some of those frequencies to which we are connected, without even knowing it. That nothing is accidental, that all the people we meet in life, as he beautifully says, ”if they are good, that we are left with a good memory, if they are not that we are left with an experience”. And to this day, I live by this Tesla’s principle, that whatever happens to me, whoever I meet, whatever is happening in my life, either on a business or private plan, is some kind of Tesla universe.

It was ment to happen. That’s why I accept things as they are, I have learned that from him, and I still fantasize about something I still have to do, just like he did, “says Dimich.

Screenwriter Milos Rastovic is one of those who, alongside Dimich in the role of Tesla, directs the story, which features more than 70 successful American Serbs – scientists, businessmen, politicians, journalists, actors and more.

“The thing what Serbian Americans or American Serbs, have contributed to this country, and what this film actually shows, is how Serbian immigrants actually followed the path of Nikola Tesla, as well as of Michael Pupin and our other great men in the construction of their lives, enviroment and  country. And if we follow the path of Nikola Tesla, Michael Pupin and other great people, we can be sure that we will not be lost for our faith, for our fatherland, and for ourselves”.

Zeljko Mirkovic, whose previous films “The Second Meeting” and “The Promise” had a very good reception with the audience and critics, said that this was probably the most complex project he had worked on, and that he devoted more than five years of his life for this project.

“In the end, when the final product was being built, it was not built in a linear fashion, creating a story about identity and all people, but it was rather built in layers – in five levels – and assembled somewhere mosaically into one image, actually carrying that message, which I said that all of us together should believe that we can build a better society, and in order to do that we should get to know each other and build peace through understanding”.

Before Washington, and after its premiere in Belgrade, ”Tesla Nation” was shown in several US cities, including New York, Los Angeles, Pittsburgh, Boston and Miami. The Washington premiere was organized by the Serb National Federation of Pittsburgh, the Office of Cooperation, Trade and Investment of the Republic of Srpska in the United States of America, the Serbian Orthodox Church of St. Luke, and the Embassy of Serbia in Washington.