On July 28, 1918 the government of Woodrow Wilson, the President of the United States of America, issued a proclamation marking that day “A Day of Prayer for Serbia”. It was determined that on that day the Serbian flag would wave at the White House and that church bells throughout America would ring in honor of Serbian victims of World War I. A large number of Serbs from America had left their families and homes in the New World, desiring to help their brothers in the battle for honor and freedom in the homeland and join the Serbian army. Many of them never returned. Recognizing their sacrifices and love for the Serbian people, but remembering the great friends of our people in America, the Serbian Orthodox Church is organizing a celebration of the 100th Anniversary of President Wilson’s proclamation, the breakthrough of the Salonika Front and the end of the World War I.

Under the spiritual patronage of the Bishop of Eastern American, His Grace Irinej, the Serbian Orthodox Church in North and South America is organizing a multi-day celebration of these significant events in Washington DC. The celebration will begin on Wednesday, July 25, 2018 with Grace Bishop Irinej offering the prayer at the opening of the US Congress session. That afternoon a reception will be held on the premises of Congress organized by the Serbian caucus in the US Congress, Embassy of the Republic of Serbia in Washington and the World War I Centennial commemoration Committee of the Serbian Orthodox Church.

On the following day, July 26, 2018 the National Press Club is planning an academic gathering on the role of the Serbian Orthodox Church and the Serbian people in the First World War. The State Department is expected to be represented at the highest level. Sponsoring this gathering will be the Serbian National Defense, whose founder and first president, Mihailo Pupin, played a major role in organizing help to our people during World War I. A reception is planned for all participants at the conclusion of this meeting. 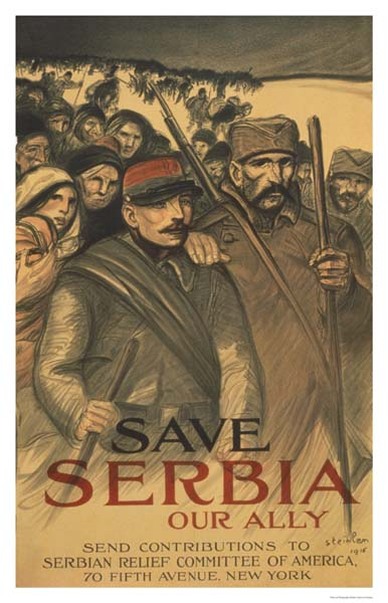 During the academic gathering a visual exhibit entitled, “There, Far Away: 1918-2018”, will premiere, organized by Art Exchange from Washington and their partners.

On Friday, July 27, 2018 a formal reception will be given at the Carnegie Institution in Washington, organized by the Representation of the Republic of Srpska and in honor of Her Excellency Ms. Željka Cvijanović, the Prime Minister of Republika Srpska. A cultural program under the auspices of the Serbian People’s Alliance will follow. The participants are the String Quartet of the School for Musical Talents from Ćuprija and the Serbian Singing Society “Lira” from Washington.

On the very day of the 100th anniversary of the proclamation, on Saturday, July 28, 2018 the Holy Hierarchical Pan-Orthodox Divine Liturgy will be served at St. Nicholas Cathedral of the Orthodox Church in America (OCA), in the presence of several hierarchs and clergy. In addition to the Serbian Orthodox Church, hierarchs and clergy from other Orthodox jurisdictions in America are expected to attend. Following the Divine Liturgy, the Kolo Sestara, the Circle of Serbian Sisters, from the St. Luke Serbian Orthodox parish in Washington will prepare refreshments for all in attendance.

A formal banquet is planned that evening, to be held at the National Press Center. Distinguished officials from the world of business and politics, together with Serbian patriots, will have the opportunity to properly mark the end of the Great War, offer their respects to the Serbian victims, and to remember with gratitude the friends of our people from America in that very difficult period for Serbia.

On the last day of the celebration, on Sunday, July 29, 2018 the Holy Hierarchical Divine Liturgy will be served at St. Luke Serbian Orthodox Church in Washington. A family picnic on the church grounds will follow the liturgy.

We invite all brothers and sisters, patriotic Serbs, to join us in commemorating this significant jubilee for our people. Let us come together in remembering our great ancestors and give them due credit according to the words of Bishop Irinej: “All roads lead to Washington to celebrate the day the Serbian flag flew at the White House!”

“You are the World”: Your sacrifices cannot go unnoticed by Americans

In a few days, the one-hundredth anniversary of the Serbian flag flying at the White House, the first time in US history that a foreign flag would fly at the White House, will be commemorated. Due to the historical significance of this anniversary in Serbian-American relations, marked by both countries, the US Embassy in Belgrade has prepared a promotional video entitled, “You are the World”.

“If it so happens that one of you has given the world electricity, that without you the telephone would not exist, that one of you discovered some of the greatest mysteries of the world, that among you are those who sacrificed much in order to achieve everything… If all of that had happened among your people then we can say that your country is a country of people and their great accomplishments. Some dreams began in Serbia and changed lives. While some Serbia accomplishments have changed the whole world”, it is said, among other things, in this video.

The US Embassy has stated that the goal is to honor the Serbs who have indebted humanity: “In celebrating this event and with the ‘You are the World’ campaign, the US Embassy also honors the Serbs who made a significant contribution to humanity, a contribution that is respected and welcomed in the US and worldwide, the contribution that has enriched us all. Relations between Serbia and the United States are created by our people, individuals whose talents and work contribute to the development of science, culture, and sports, with exceptional achievements in their individual fields. The United States is proud to have contributed to their development and success.

“This year as well the US and Serbia together – in Belgrade and in Washington – will celebrate one hundred years since the Serbian flag flew at the White House on July 28, 1918. President Woodrow Wilson was friends with Mihailo Pupin and wanted to show respect for the Serbian people and his commitment to the values shared by both countries. At a time when President Wilson made such a decision, the world was still trying to recover from one of the most horrific and tragic wars in human history, a war in which Serbia lost almost a third of its population. For Americans, such sacrifices cannot go unrecognized. In all of US history the only other time a foreign flag was raised at the White House, was the French flag in 1920. That is what makes this event so significant for both Americans and Serbs and why we wanted to mark it this way,” was concluded at the Embassy.