Home Social Tito’s Bunker in Konjic: The most unusual Art Gallery in the World...

A secret nuclear bunker run as a contemporary art space? This could only happen in Bosnia, says Ian Bancroft.

It’s not every day you visit an art gallery with virtually no signs directing you to it, but then it’s not every day that you find an exhibition space in a nuclear bunker. ARK may be the trendy modern art gallery that it sounds, but its name stands for Atomska Ratna Komanda, or Nuclear Command Bunker – a top secret military site constructed for the former Yugoslavian president Josip Broz Tito.

Today, thanks to the perseverance of two artists, Edo and Sandra Hozić, ARK – near the town of Konjic in Bosnia-Herzegovina, about an hour south-west of Sarajevo – has been transformed into the most unique and unlikely of artistic spaces. It’s home to a renowned Biennial of Contemporary Arts – the 2017 edition launches on 21 April.

We meet our guide, Mirnes Bajić, outside two utterly nondescript white buildings nestled in the foothills of Mount Zlatar, alongside the jade green waters of the river Neretva. A skull and crossbones on a red background warns of landmines – one of the lingering reminders of the devastating war that wrought havoc across the region in the early nineties.

“Let us build a monument to remind us of our futuristic past,” reads a sign opposite by Egyptian artist Basim Magdy – a reference to the futuristic monuments dotted across the former Yugoslavia, also commissioned by Tito. For some he was a dictator; for others, a socialist liberator.

We enter past an aged reception room (replete with small bed) and through a short tunnel. The air is thick and stuffy – Mirnes draws his handkerchief to blow his nose. The casino-style lighting starts to affect our sense of time. New additions – two giant mirrors facing one another by Albanian artist, Helidon Gjergji, and cracked floor mirrors by Italy’s Alfredo Pirri – further disturb our sense of space. 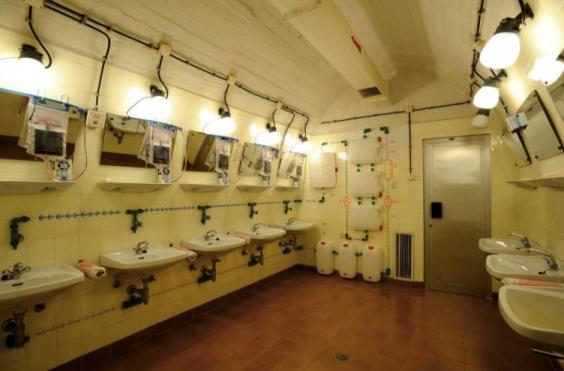 Completed in 1979 after some 26 years, the ARK covers 6,500 square metres and cost an astronomical $4.6 billion (£3.6b), equivalent to over $10b (£7.8b) at today’s prices. The price tag is mocked by Serbian artist, Dragoljub ‘Rasa’ Todosijevic, who’s installed a decrepit wardrobe pointlessly rotating outside the bedroom intended for Tito.

The bunker was capable of housing some 350 of Yugoslavia’s military and political elite for up to six months, and could withstand an explosion equivalent to 25 kilotons of TNT (more than the atomic bomb dropped on Nagasaki). An installation by Ana Džokić and Marc Neelen, situated in one of the bunker’s bathrooms, considers the prospect of making such a life support system available to everyone.

Codenamed ‘Istanbul’, this was the best kept military secret in Yugoslavia – locals were completely unaware of its existence until 2003. Currently, its collection – described by former Tate Modern director, Chris Dercon, as one of the most valuable in south-east Europe –comprises 125 works by artists from 102 countries, 75 of whom have participated in the Venice Biennale.

It will be further swelled with the launch of the fourth, and penultimate, edition of the Biennial of Contemporary Arts this week, which welcomes artists from Germany, Italy, Spain and Romania. Though the participating countries change, the theme remains the same – telling what Edo calls the “endless story about the Cold War”. It was a prophetic choice given rhetoric about today’s geopolitics.

“Walking through the bunker is like entering a time machine,” Hozic had told me. Everywhere there are relics of the past – typewriters, red telephones, radios, maps and notebooks. The lavatories have their original toilet paper. 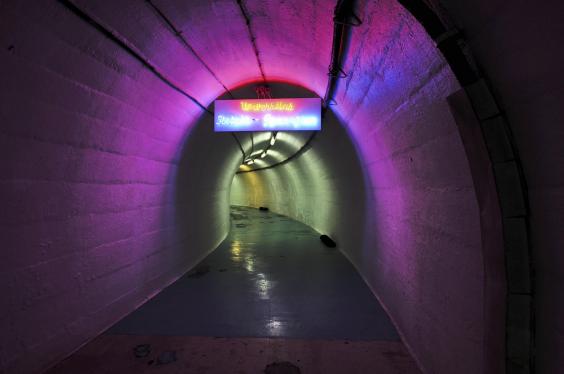 There is a vast underground water reservoir, two large diesel tanks (onto which Croatian artist Mladen Stilinović has dubbed the “Material Value of Laziness”), and miles and miles of piping. There is heavy machinery, typically US-made, and shelves full of spare parts.

The bunker is, of course, a hybrid museum; part military object, part contemporary art space. Two artists, in particular, fuses these respective elements. Bosnia’s Mladen Miljanović films himself drinking wine from a green army helmet – a reference to family celebrations for his taking of the military oath, before using the helmet to damage a photograph of himself departing for military service. In a pitch-black room, the late Croatian artist, Edo Murtić, presents luminous skeletons of former army generals, their medals still pinned to their chests. Both question the very systems to which people gave their loyalty and lives.

For Hozić, the Cold War was not just a clash between military blocs but between societies. The bunker contains reflections upon hippie culture, gay rights, Rock and Roll, and environmentalism – all new movements which arose during the days of the Cold War.

An elongated chess board, entitled ‘Endgame’, by Bulgaria’s Luchezar Boyadjiev, reflects upon the Cold War’s strategic considerations, whilst Braco Dimitrijević’s gigantic portraits, including one of Margaret Thatcher, consider the vital figures of a war that Hozić insists has never ended.

Another of Magdy’s works juxtaposes the words “The future belongs to us” (which is often read as US, for United States) next to an animated sketch of a red dinosaur looking towards a pool of water as a comet or volcano explodes in the background. It is a warning against complacency in all its forms.

The fifth and final Biennial in 2019 will involve artists from the United States and Russia; a symbolic end to this phase of the bunker’s existence. It remains a unique project, one that Hozić believes was only possible in Bosnia-Herzegovina. There are apparently some 28 atomic shelters across Europe, but none have been given over to the service of the arts. The bunker’s long-term future, however, is uncertain. Edo and Sandra hope that Bosnia-Herzegovina’s Ministry of Defence will one day assume responsibility for running the bunker as a permanent museum. It may appear far-fetched, but so remarks Edo was the idea of “sending rockets to Mars”.

TheSrpskaTimes - 23.07.2021
0
The events in the Middle East have made a large number of interstate relations of the former "allies" very complicated due to the large-scale...

Head of the EU Delegation to BiH: Tourism can – and...