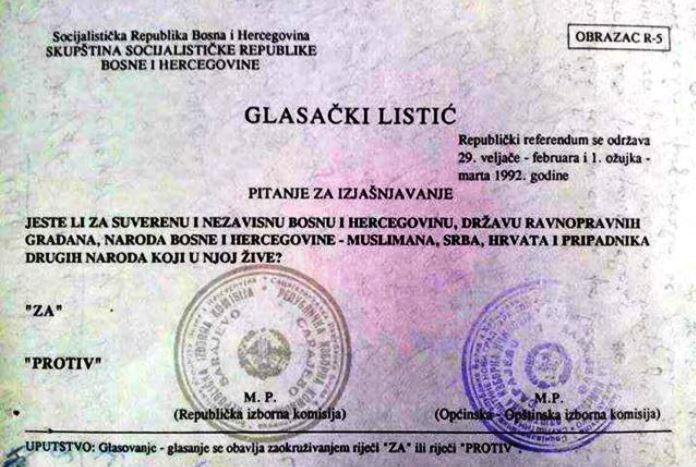 A two-day, unconstitutional referendum on the independence of BiH, which lead to a civil war and left unforeseeable political, national and economic consequences on the whole society, started in the then Bosnia and Herzegovina on February 29, 1992.

Bosniak representatives, who always outvoted Serbian MPs in all crucial matters, decided that a referendum will last two days, February 29 and March 1.

The reason was an ultimatum put by the Croats, who said they would not vote if the then Bosniak leadership, headed by Alija Izetbegovic, does not guarantee them a cantonization, which Izetbegovic once signed and then rejected /Cutileiro Plan/.

On the first day, mostly Bosniaks voted, but a turnout was below 50%.

Negotiations between the Croatian and Bosniak representatives lasted the whole night, and only after the understanding was reached that a cantonization is necessary, Croatian leader Mate Boban called on Croats to vote in a referendum on the second day.

It turned out that Izetbegovic and the SDA leadership deceived the Croatian side, which is why the conflict culminated in 1993 in bloody Bosniak-Croatian conflicts.

Serbs boycotted the referendum since they previously voted that they do not want to leave Yugoslavia.

Officially, 64.31% of eligible voters turned out in the referendum.

However, Serbian sources published that the turnout was 63.7% of citizens of the Socialist Republic of Bosnia & Herzegovina, of which number 92.7% voted for independence, by which a condition requiring a two-third turnout in a referendum was not met.

Then legal condition for accepting referendum results was that more than two thirds of citizens – more than 66% – turn out in a referendum, and that the same number vote “yes”, so that the first condition /turnout/ was not met.

The tense situation in which the referendum was held culminated when Serb Nikola Gardovic was killed in front of an Orthodox church in the center of Sarajevo at a wedding of his son. Within few hours, the city was blocked by barricades which were guarded by armed civilians, Serbs and Bosniaks.

Since then, March 1, /the second day of the referendum/, has been marked in Bosniak parts of the FBiH as the so-called Independence Day of BiH. Croats mostly tolerate it, but do not celebrate, while it is not celebrated in Republika Srpska but is considered the date when the war broke out in BiH.

The illegitimate referendum led to conflicts and crimes as early as in March 1992.

The crime in Sijekovac at the end of March, when 46 people were killed, mostly women, children and elderly, where the youngest victim was Drago Milosevic /17/, and the oldest was Vaso Zecevic /77/, was particularly cruel. Fifteen houses and the Church of the Great Martyr Marina were set on fire.

Despite all this, Sarajevo politicians cite events that happened at the beginning of April, prior to the international recognition of the then Izetbegovic’s government in Sarajevo on April 6, as the beginning of the war.

The two-day referendum completely destroyed every national trust in BiH, led to fierce and devastating conflicts, changed the ethnic image of BiH for good and created a complex community in Dayton, BiH composed of two states /Entities/ – Republika Srpska and the FBiH.