The horses seemed tame enough. One, a chestnut, ambled towards me as I trooped up the path to Čuker’s 1,359-metre peak. Not accustomed to meeting horses on Serbian mountains, I carried on before the chestnut could get a sniff of my lunch. I’d been saving my burek, a cheese filo pie found all over the Balkans, as my reward after walking uphill for two hours.

My more immediate reward was a view of mossy green mountains that turned blue in the distance. The air was clean and mild, hinting at rain to come. It felt like the Brecon Beacons, but I was in the Zlatibor mountains, western Serbia’s summer and winter playground. 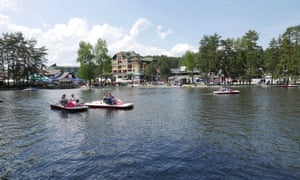 Serbia’s king Aleksandar Obrenović put Zlatibor on the map in 1893, when he discovered the health benefits of the area’s exceptionally clean air. People from the nearby city of Užice built summer homes here, creating what is now one of Serbia’s most popular tourist areas. It’s rather like a mini version of the Alps, complete with chalet-style steep-roofed houses in Zlatibor village, adventure parks, a lake full of pedalos and a bijou ski resort, Tornik. In summer, Tornik’s chairlift reopens to transport mountain bikers and hikers to its peak, which I could clearly see from the top of Čuker.

And, like in most alpine resorts, there were things to do in weather that made hiking or biking unappealing. As the rain came down, I drove 25 minutes to Stopića cave, a wondrous limestone world of illuminated waterfalls and travertine terraces. Stalactites formed a jagged vaulted ceiling as awe-inspiring as any cathedral. 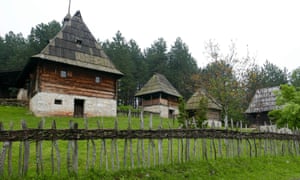 From here it was less than a 10-minute drive to Serbia’s open-air museum, Staro Selo (Old Village) at Sirogojno. It’s a fascinating collection of 19th- and early 20th-century farm buildings. The wooden houses have steep roofs covered in wooden tiles, and rural life is engagingly reconstructed, with family homes, grain stores, livestock pens and the all-important shed for making rakija (brandy). I could visualise my Serbian grandparents sitting by the fire, the smoke wafting up to the open loft to cure the hanging meats. A few lodges have been equipped with such fripperies as bathrooms and heating, and stays cost about £18 a night B&B. 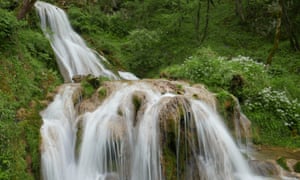 As I took the twisting road south to where Gostilje waterfall plunges 20 metres from a limestone cliff, the mountains grew taller and greener. I followed a path downstream through the forest to more cascades and the Katusnica river. For 150 dinars (£1), you get a lot of waterfall bang for your buck, with picnic spots, a play area and an outdoor pool.

Despite the weather, I was enjoying Zlatibor’s quirks and eccentricities. Two of them are barely 2km apart on the aptly named Mokra Gora (Wet Mountain). The Šargan Eight train is a fantastic feat of engineering, a 1925 narrow-gauge railway that crosses the mountains in a figure-of-eight loop. 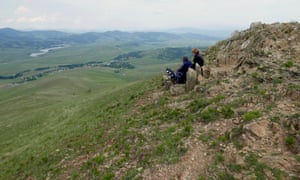 From the trundling vintage train, I spotted Drvengrad (mecavnik.info) on a hillside. This “wooden town” was built by Serbian film director Emir Kusturica for his 2004 film Life Is a Miracle, and is still there. It’s like a whimsical version of Sirogojno, with similar wooden-roofed houses that can be rented, as well as cafes, shops and a hotel. It’s the setting for Kusturica’s annual January film festival, and streets are named after Federico Fellini, Joe Strummer and Nikola Tesla.

True wildness was just out of reach in neighbouring Tara national park, whose magnificent mountainous landscapes would have to wait for another, drier time. The sun did hang around long enough for a last walk above Zlatibor village, where the views nearly matched those of my first hike. No horses this time, just a grizzled shepherd and his flock – and a lunch of spit-roast lamb at Restoran Mačkat. For a final flavour of Zlatibor, it was authentic as you could get.