Our sample consists of more than two thousands people, all ethic Serbs, uniformly distributed across Serbia and other Balkan countries with numerous Serb population. Many of them have been tested in mass actions of Y-DNA testing, during several last years. And here are our results.

Haplogroup I alone comprises about 47% of our statistics.

Haplogroup I2a1-M423 > L621 > CTS10228 (Slavic-Carpathian) is single largest branch, with estimated age at 500 BC at most, and it comprises about 37% of Serbian paternal lineages. It is important to note that it is pretty uniformly distributed among Serbs across Serbia and other ex-Yugoslav countries with numerous Serb population. It is the most numerous haplogroup among Serbs in every region, in no region with less than 30%, and in some regions up to 46%. Majority of Serbian I2a1-CTS10228 belongs to PH908 (previously known as „Dinaric-South“).

Paternal Haplogroup E is among Serbs represented predominantly by its subclade V13. It is relatively uniformly distributed across Serb population in different regions, with slightly greater frequency in southern regions, like southern Serbian province of Kosovo and Metohiјa. Highest frequency of V13 in Serb population (over 50%) is recorded in eastern part of Montenegro known as Brda („Hills“), the home of three largest Serb clans that belong to different subclades of V13: Vasojevici (PH1246>BY14151), Kuci (CTS5856 > Z5018 > Z16661 > BY165837) and Bjelopavlici (CTS5856 > Z5017 > Z16988 > BY155589). Another frequent subclade of V13 among Serbs that also originates from single bloodline from Montenegro is CTS5856 > Z5017 > Z19851 > A18833. However, most diverse subclade of V13 in Serb population is CTS5856 > Z5018 > L241 which is distributed in all regions settled by Serbs, and unlike previously mentioned subclades, it’s represented by large number of not so numerous bloodlines. Other E subclades like V22, M84 and Z841 are presented in small percentages.

Haplogroup R1a is major haplogroup among Serbian population, and it’s distribution is relatively homogenous. Serbs mostly belong to sublcades M458 (mostly to downstream L1029, but to smaller degree A11460 and L260 also), and Z280 (downstream subclades Y2613, YP343, L1280 > YP611 and YP4278), It is believed that the most of Serbian R1a is brought to Balkans during Slavic expansion about 1500 years ago.

Unlike haplogroup I2a1 > CTS10228, P109 > FGC22045 is not uniformly distributed. In eastern Serbia it is almost nonexistent, whereas it is ubiquitous in other regions populated by Serbs, in some of them even reaching more than 20%. 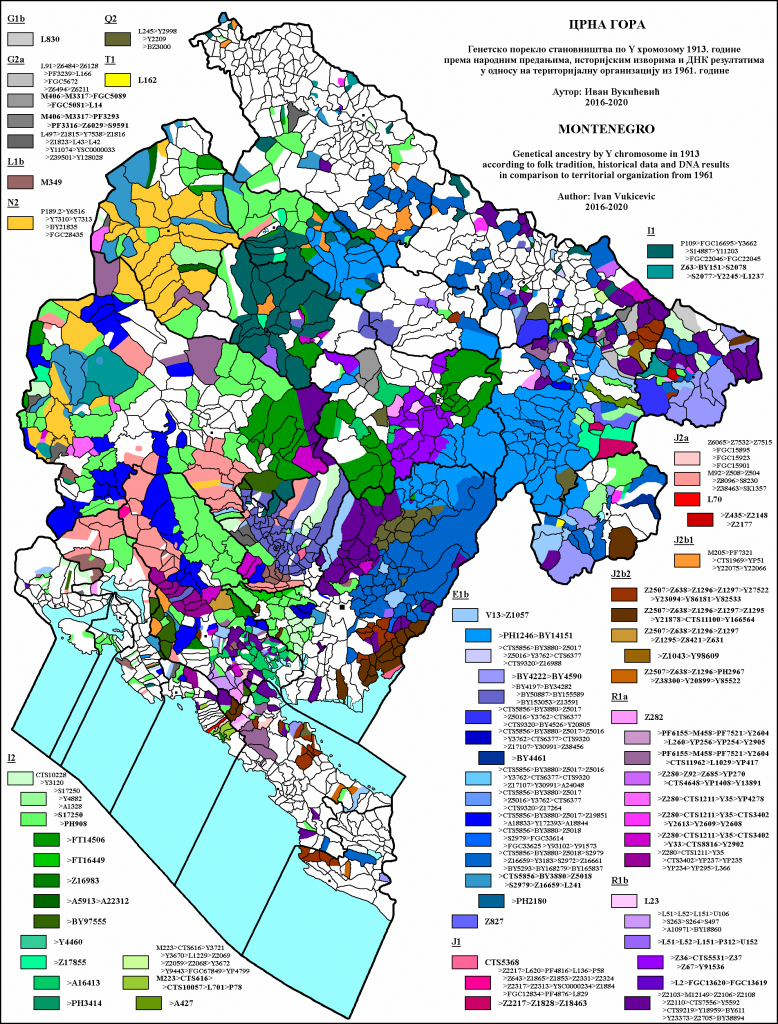 Haplogroup J2b1 > M205 > Y22066/Y22059 comprises about 3.6% of Serbian Y-DNA. It is very young, TMRCA of whole all of it is about 1000 years. Despite it’s moderate frequency, it is important since it is well distributed across all regions with Serb population, from the border with Bulgaria to the most western area of Serb settlements, where it reaches more than 5% of Serbian Y-DNA. Beside, in neighbouring peoples (Albanians, Croats, Bulgarians) it is very rare. It is one of two most intriguing haplogroups in Serbs (other is N2 > P189.2).

J2b2 > M241 is represented with 1.25% among Serbs. Two main subbranches among Serbs are Z638 and PH1602, whereas the first is slightly more numerous. J-M241 among Serbs generally could be found in all regions,but is somewhat more represented in Southern Serbia, in southern Serbian province of Kosovo and Metohiјa and among Serbs in Montenegro.

Haplogroup G among Serbs generally reaches about 3-5%, dependable on the region. Most common G branch among Serbs is L497, which is about 2/3 among tested G Serbs on Serbian DNA Project. M406 branch is found in various regions, but also among two brotherhoods in Montenegro, L14 in Moraca’s brotherhood of Selakovic and S9591 in Mezgaljani brotherhood in Sekular area.

Branch under it, Y60799 is at this moment confirmed among few Serbs and it probably represents characteristic Serbian branch. L42 and it’s branches have highest frequency and diversity in the Alps and probably represent Celtic heritage among the Serbs.

Haplogroup J2a, being very old and very diverse, among Serbs is represented by several subclades. Among the most numerous belongs L70, which is concentrated more in southeastern Serbia. Also numerous is subclade J2a-M92 > Z8096 > S8230 > Z38463, which has more western distribution. Its base are two tribes in western Montenegro, Cuce and Pjesivci. Beside them, subclades SK1336 and S18579 could be found among ethnic Serbs.

Haplogroup N2 > P189.2 > FGC28435, with average frequency among Serbs at 2.8%, is one of two the most intriguing. Outside ethnic Serbs, it is very rare, few haplotypes of it have been found across Europe and Near East. Even in Serbian population it is not uniformly distributed. Seems that it’s home area is in western Montenegro, near border with Herzegovina, from where it spread to Bosnia and Western and Central Serbia. In Eastern Serbia it is almost nonexistent. It’s distribution reminds to distribution of Serbian I1 > P109 > FGC22045. Which is not big surprise, since both stem from region of western Montenegro.

Frequency of haplogroup J1 is about 1.7%. Several subclades are present in Serbian population, the most common is PF7263, which has more western distribution, among Serbs in Herzegovina and Bosnia. FGC11 can be found in southeastern Serbia, and province of Kosovo and Metohija. Also, subclades Z1842 and PH77 can be found, in smaller amounts.

Haplogroup T is represented with 0.38% (8/2086), which are scattered across serbian population. We have not determined yet deeper subclades of any Serbian T sample with certainty, but it seems some of them belong to T-L131.

Few L haplotypes have also been found. Two of them belong to L1b-M317, and one to very rare subclade L2-L595.

To haplogroup H1a-M82 belong 0.14% (3/2086) haplotypes of ethnic Serbs of our sample. It marks Roma (Gypsy) admixture among ethnic Serbs.

We also have found very few N1c or C haplotypes, whose frequency is probably less than 0.1% in Serbian population.